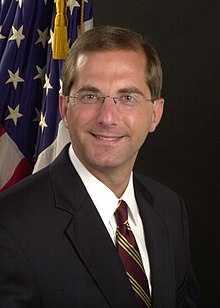 The U.S. Senate voted Wednesday to confirm Lilly USA president Alex Azar for secretary of U.S. Health and Human Services. His confirmation was opposed by consumer advocates and the public. A coalition of health care, consumer, and labor organizations delivered 300,000 petition signatures to Senate offices, asking that they investigate Azar’s role in making lifesaving medications unaffordable and vote against Azar’s nomination to lead HHS.

Robert Weissman, president of Public Citizen, said with Azar as head of HHS, Big Pharma’s political coup will be complete.

“The industry whose business model is built around government-funded research and development, government-granted monopolies and government purchases of its overpriced medicines will have installed one of its own as the nation’s top health official,” Weissman said.

At his confirmation hearing, Azar agreed that prescription costs are out of control and said he wanted to address medicine affordability. However, he was eager to place blame for the problem on every player in the health care industry except the one that matters most: Big Pharma, he said.

Weissman said Azar never should have been confirmed, adding Public Citizen will test again and again whether he remains loyal to Big Pharma or aims to serve the American people.

Peter Maybarduk, director of Public Citizen’s Access to Medicines Program, said Eli Lilly under Azar helped pioneer a devolution of the pharmaceutical industry, where firms compete by increasing payouts to middlemen instead of making medicines affordable for consumers.

During Azar’s tenure, Eli Lilly, Novo Nordisk, and Sanofi, the “big three,” tripled the price of the major insulin products in near lockstep, Maybarduk said. They used high list prices to attract the business of pharmacy benefit managers, middlemen who keep an undisclosed percentage of the discounts they negotiate with manufacturers. Patients and consumers suffer as a result, he said.

Does Trump purposely assault our senses and kick us in the gut on a daily basis? I think he does. Does he have an ounce of compassion? I think not.

It's like Trump is doing a high-five tour with his rich buddies. "Hey, look how stupid they were to elect me. Let's put people in charge of the departments that they want to tear down. Should be fun. Let's see how much money we can get out of this too."