Facts and Figures for Valentine’s Day 2018 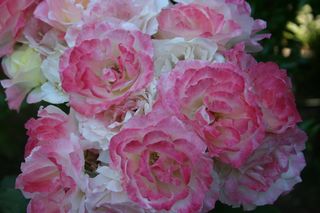 It's that time of year again. Valentine’s Day is coming up. What are your plans? Is this a big celebration for you and your loved one? Will you be going out to dinner, buying chocolates or flowers? Or, will you be preparing a special meal at home?

U.S. consumers are expected to spend an average $143.56 on Valentine’s Day as 55 percent of the population celebrates this year, an increase from last year’s $136.57, according to an annual survey prepared for the National Retail Federation. Total spending is expected to reach $19.6 billion, up from $18.2 billion last year. The numbers are the second-highest in the survey’s 15-year history, topped only by the record $146.84 and $19.7 billion seen in 2016.

Those celebrating Valentine’s Day plan to spend $4.7 billion on jewelry, 19 percent; $3.7 billion on an evening out, 35 percent; $2 billion on flowers, 36 percent; $1.9 billion on clothing, 17 percent; $1.5 billion on gift cards/gift certificates, 15 percent; and $894 million on greeting cards, 46 percent. More consumers plan on purchasing candy this year, with 55 percent – up from 50 percent – saying they will give gifts of candy for a total of $1.8 billion.

Even those who aren’t taking part in Valentine’s Day festivities won’t be left out. More than a quarter, 27 percent, of consumers who aren’t observing the holiday, have an alternative in minds such as treating themselves in some way or getting together with family and friends.

The U.S. Department of Commerce offers the following information on the day of lovers.

Median age at first marriage in 2015 for men and women, respectively.

The overall percentage of people 15 and older who reported being married, except those separated.

The rate of marriages per 1,000 people performed in Nevada during 2014. So many couples tie the knot in the Silver State that it ranked number one nationally in marriage rates. Hawaii ranked second with a marriage rate of 17.7.

The number of marriages that took place in the United States, excluding Georgia, in 2014. That breaks down to about 5,800 a day.

Interesting ... but 47.5% of people 15 and older reported being married? Wow, seems very high to me ... I didn't know all those 16 year olds were getting hitched!

We don't celebrate Valentine's Day but your stats were very interesting to read.

I'm sure that goes up and down depending on where you live. For instance, here in Los Angeles, double the amount you spend.

My husband and I used to own a chocolate shop and the sales from Valentine's week only could keep us afloat for a few months. It was always fun to see the women plan out Valentines Day and place their orders weeks in advance and the men came rushing in on the 14th with this "Oh shit!" look on their faces as they hoped we didn't run out of chocolate before they got to the front of the line.