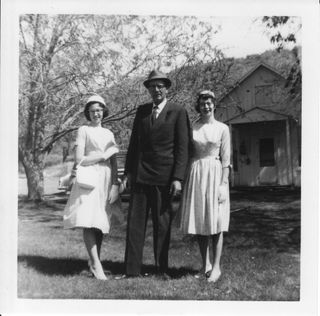 Last Sunday on Palm Sunday, my sister and I went to a Methodist church near her house in the Seattle area. We grew up Methodist, and I’ve wanted for several years to go to church there and remember the old days.

It was interesting. The church didn’t have a choir, it had a band. The Catholic church where my grandchildren attend in Madrid has guitar music. I guess updating the music is one-way churches are trying to appeal to younger generations.

At the Methodist church, we attend Sunday, we didn’t know any of the hymns. Instead of a hymnal, the words to the songs were shown on a large screen at the front of the church. It was hard to follow along and sing because there weren’t any music notes to follow, just words.

The bible verses also were different. The King James Version of the bible that we’re used wasn’t used, but a modern translation.

It’s interesting that the minister not only has to prepare a sermon but also needs to create a PowerPoint every Sunday. I imagine the Methodist church provides illustrations for the ministers to use.

We had branches that looked as much like palm branches as you can find in the Seattle area. We waved them when the minister said hosanna.

The members of the congregation were very welcoming. 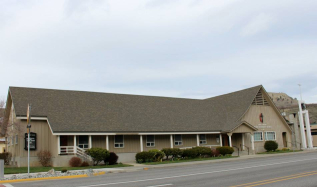 When we were growing up, we attended the Lake Chelan United Methodist Church, pictured above. One of my favorite Easter memories is going to church there, and listening to the Easter hymns.

I also liked going with my sister to Sunrise Service. I enjoyed the way the hymns sounded in the hills surrounding Lake Chelan. Afterward we attended a pancake breakfast at the church.

One Easter, I was up late the night before finishing a red suit I wanted to wear the next day. I made most of my clothes when I was a teenager, so I enjoyed seeing the new outfits people bought for Easter.

The photo at the beginning of the article shows the dresses and hats my sister and I wore for Easter. We wore white gloves, too. That’s my dad in the photo with us.

Another great Easter memory was seeing the excitement my two daughters had when they were young, and they found their Easter baskets.

I was also able to be with my twin grandchildren the Easter they were two years old. It was the first Easter that they were able to be thrilled by an Easter egg hunt.

What’s your favorite Easter memory? Was it when you were young or a newer memory involving your children or grandchildren?

Lovely memories and I admit I haven't been to church in a very long time. Growing up we went to Easter services and always in a new outfit. Also, it might be an Australian 'thing' but each Easter most kids received a pair of flannelette pyjamas plus Easter Eggs. I think because Easter is in Autumn the gift of Winer PJs was timely. It is amazing when I mention this to my Aussie friends and they all have the same memory too!

Even though we only celebrated Easter with Easter eggs and Passover, I loved when we used to get dressed up, white gloves and all, to go out in "Easter bonnets" I was always a girly girl.

Thanks for telling me about the Australian tradition of getting flannel pajamas along with Easter eggs. It sure makes sense.

I enjoyed getting dressed up for Easter, too, as the photo above shows.