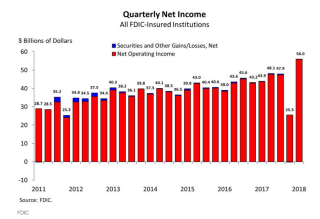 Commercial banks and savings institutions insured by the Federal Deposit Insurance Corporation reported net income of $56 billion in the first quarter of 2018, up $12.1 billion or 27.5 percent from a year ago.

Despite the fact that banks are having record earnings, they lobbied hard to get the Republican-led Congress and President Trump to enact huge cuts to regulations.

If banks have record earnings, why do they need to have regulations slashed, so they can make even more?

The main argument was to lessen rules for credit unions and smaller banks. However, the new law will ease restrictions on big banks, such as JPMorgan and Citibank. The Dodd-Frank restrictions passed in 2010 were designed to keep banks and other financial institutions from amassing too much debt.

The House passed the bill Tuesday by a vote of 258 to 159, with 33 Democrats supporting it. The Senate passed it in March. Trump is expected to sign the bill saying he would “do a big number” on Dodd-Frank soon after taking office.

Brown also said the bill will harm home buyers because mortgage rules put in place after the Great Recession to curb abusive lending practices are being eliminated.

“This bill helps large banks that are making record profits,” Brown said. “While wages are stagnant or declining for working families, the bill fails to include any provisions that would benefit hardworking Americans. In fact, it reduces the protections they currently have in the mortgage market.”

He said, just like the GOP tax bill, the bill is a giveaway to special interests that does nothing to put money in the pockets of working people.

Mike Litt, consumer campaign director for U.S. PIRG, said it’s hard to watch Congress ignore the painful lessons of the Great Recession that started with a historic financial collapse that occurred less than 10 years ago.

“The warning signs are plain to see,” Litt said. “There is a strong chance we will see an increase in mortgage fraud, racial discrimination, and risky banking practices.”

Just like the Republican tax cut, this one is a loser for consumers.