Home About Newsletter Categories Donate
Penedes, the cava region of Spain, continues to amaze
Agusti Torello Mata, a leader in the cava industry, gives his winery his name

Freixenet makes millions of bottles of cava at a reasonable price

When my daughter, sister, and I headed to the Penedes region of Spain, famous for its cava or sparkling wine, the first winery we visited was Albet i Noya, a small winery that makes organic wines.

The second winery I selected, Freixenet, is the largest seller of Spanish cava in the world. 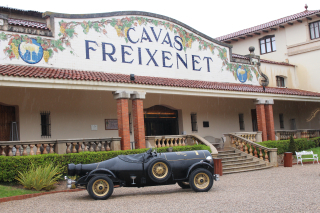 When we drove up to the winery, located in Sant Sadurni d’Anoia, we saw the famous Freixenet vehicles used in its advertising campaigns throughout the years. A convertible… 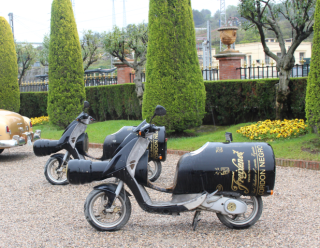 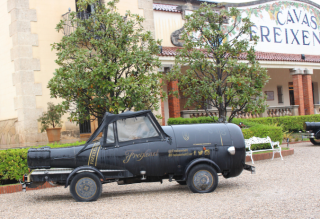 We started our tour with a movie in English about Freixenet.

We learned about the history of Freixenet. It was created by the merging to two Spanish wine making families. In 1861, Francesc Sala Ferrés started a business making and exporting wine to America. In 1889, Pedro Ferrer married Dolores Sala Vivé, heiress to the Sala wine company.

They decided to move from wine to cava production. Grape production had diminished due to the phylloxera infestation that had destroyed red grape vines across Europe so they decided to replant with white grape varieties such as Macabeu, Parellada, and Xarel·lo to use for sparkling wine production.

In the late 1930s, Pedro and his oldest son were killed in the Spanish Civil War. The company was then run by Dolores and her three daughters. Dolores retired in 1957, passing on the responsibility of leading the company to her son, Josep Ferrer. He, his sons, and his nephews, were responsible for making Freixenet a world leader in sparkling wines made using the traditional method.

Freixenet most often uses Macebeu, Parellada, Chardonnay, and Xarel·lo grapes for its cavas. Our tour guide told us Freixenet has annual sales of 80 million bottles. Half of that amount is sold in Germany. Freixenet has 18 plants in seven countries on three continents. 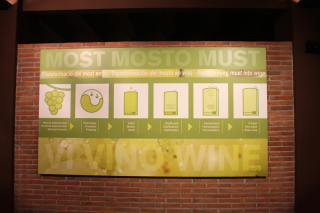 He explained how the grapes are turned into wine… 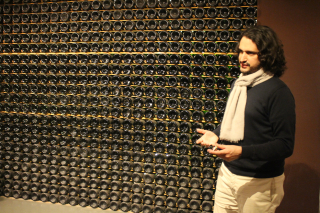 how the second fermentation occurs in the bottle… 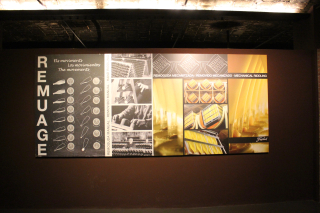 and how the sediment is moved to the neck of the bottle so it can be popped out after being dipped into a frozen liquid. 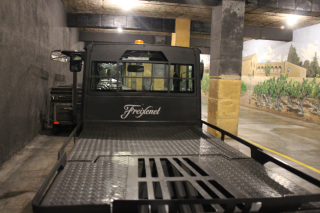 Then we rode on a tourist train through part of the 14 miles of underground cava caves built at Freixenet in the 1970s. At the end of the caves, we went past rooms where the syrups and the yeasts used in the second fermentation in the bottle are made.

The train dropped us off at the tasting room. 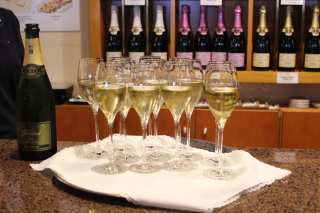 We tasted a brut nature cava, with no sugar added, and the Elyssia Gran Curvee, a cava made with Chardonnay, Macabeo, Parellada, and Pinot Noir, aged a minimum of 10 months in the cave. We enjoyed both.

Freixenet is well known for its lavish annual Christmas TV commercial, often featuring a famous celebrity dressed in gold and surrounded by golden bubbles. The gift shop sells golden costumes so people can dress up like the beautiful Freixenet models. 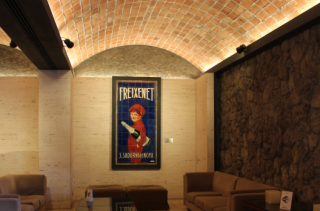 Before its famous golden commercials, the Freixenet advertising icon was a boy in a red hat holding a bottle of Freixenet cava under his arm. Freixenet became a household name in 1929 thanks to ads featuring the boy. Most Spanish people recognize this popular advertising icon today.

A notice on the Freixenet website says that in March, Henkell & Co., the Oetker Group`s branch for sparkling wine, wine, and spirits, signed an agreement to acquire 50.67 percent of Freixenet’s shares and signed an agreement with the remaining shareholders José Ferrer Sala and José Luis Bonet Ferrer. 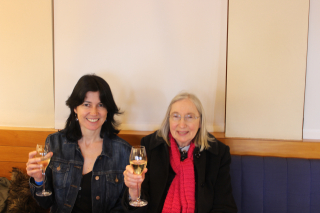 I picked Freixenet for a tour because it’s Spain’s largest cava producer. We were pleased with our tour and the cava.

My next article will be on the final winery in our tour, Agusti Torello Mata.