Penedes, the cava region of Spain, continues to amaze

In 2016, my daughter and I visited the Penedes region in Spain near Barcelona. It’s famous for its cava or sparkling wine.

We went to Codorniu, one of the largest cava makers in Spain, Gramona, a small winery that makes organic cava, and Pares Balta, a winery that’s beginning to sell organic wines and practices biodynamic farming.

This year my sister traveled with me to Spain for the first time, and my daughter and I decided that it would be fun to return to Penedes and show her how cava is made, including the vast cava cellars.

The first winery we visited was Albet i Noya. 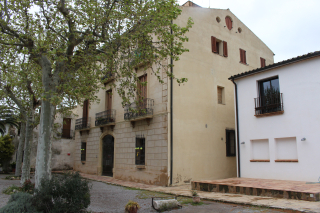 In 1978, a Danish company approached Albet i Noya, located in Sant Pau d'Ordal, about producing 100 percent organic wine. The winery was one of the pioneers in organic winemaking in Spain. Now about 60 percent of the wineries in the Penedes region make organic wine.

Albet i Noya produces about 1.2 million bottles of wine a year, all of which are organic. 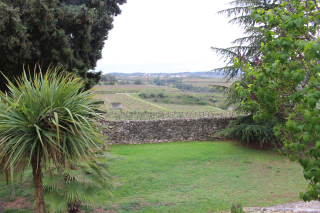 The winery is located on a hillside with a sweeping view of the vineyards. In addition to 62 acres of vineyards at the winery, Albet i Noya has added vineyards at the Can Milà Estate in Lavern and Can Simó in the Mediona area. 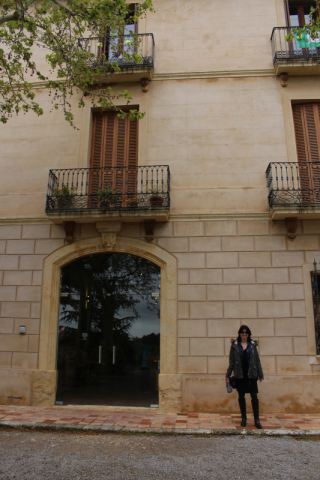 We started our tour at the main building, a large Catalan stone house where the store is located and the family lives. About 15 people, most of whom were Norwegian, joined us on a cloudy day for the tour in English. 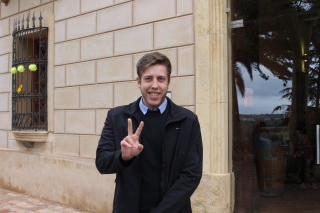 Ignasi Valls was our guide. He asked if I was the blogger who wrote an article about his girlfriend when we visited a different Penedes winery in 2016 – I was. What a coincidence. 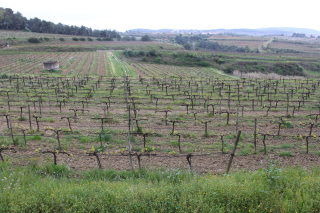 We learned that the vineyards had to be replanted in the early 1900s due to the phylloxera infestation, sap-sucking insects from North America related to aphids that feed on the leaves and roots of the vines. The solution was to graft American vines, that were resistant to phylloxera, onto the roots. Three replacement grapes were chosen – Xarel·lo, Macabeu, and Parellada – the main grapes now used in the Penedes region for cava. Other grapes used for white wines at the winery are Moscatel, Chardonnay, Viognier, Sauvignon Blanc, Riesling, and Garnatxa Blanca. For the reds, it’s Ull de llebre, Garnatxa, Cabernet Sauvignon, Merlot, Syrah, Pinot Noir, Caladoc, Marselan, and Arinarinoa.

Albet i Noya also has experimental vineyards where it looks for grapes better for climate change and the environment. It’s also trying to revive old varieties that disappeared during the phylloxera epidemic.

Albet i Noya grapes are picked at midnight which keeps them from getting softer and is cooler for the workers. All grapes are harvested by hand. The harvest is now beginning in August rather than September due to climate change. At a second building, we saw where the first cava fermentation occurs in tanks. 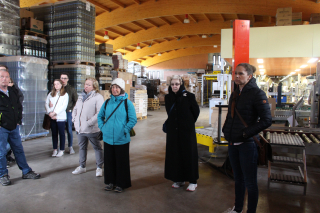 In a nearby new building, built in 2004 and made with a curved, wooden ceiling to look like the sides of the wine barrel, we’re shown where the red wines are aged and the wines are bottled. 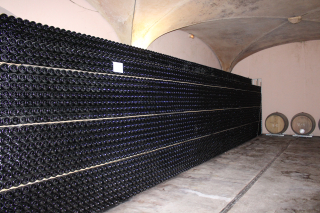 Then we went to an older part of the winery and toured a cellar, with high ceilings and large arches, a modernist design by Josep Maria Pericas in 1925.

This is where the second fermentation in the bottle occurs for the cavas. Yeast and sugar are added. Bottles are placed in a cava cellar to keep them cool so evaporation is avoided.

Albet i Noya exports 70 percent of its wines and sells 30 percent in Spain. The majority of the exported wines are sent to Sweden, Germany, and Denmark. 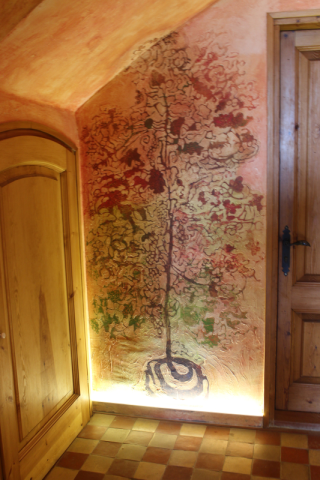 The winery has sponsored local artists since 1990 and their paintings have inspired most of the labels on the wines and cavas of the winery. The winery has a wine staircase by artist Joan Raven that features paintings on all four floors. 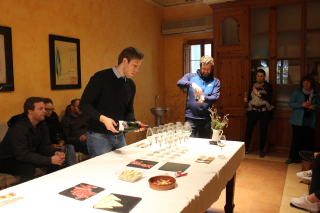 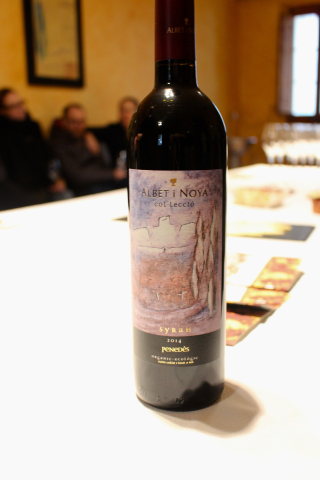 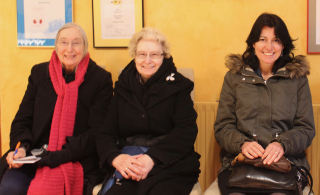 I selected Albet i Noya because it produces organic wines. It was a good choice. We enjoyed the tour and the wines.

My next article will be on Freixenet, the world's largest producer of Spanish cava.

Posted at 01:51 AM in Agriculture, Companies, Consumers, Food | Permalink | Comments (0)