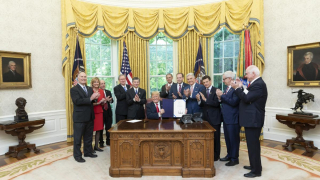 Republicans used the Congressional Review Act, a 1996 law that gives Congress extensive power to get rid of rules established by federal agencies.

Republicans used the CRA 14 times to overturn regulations that the Obama administration passed in its final weeks. However, they used the better-known CRA provision that gives Congress 60 days to kill regulations.

Mick Mulvaney, acting director of the bureau, said Monday’s resolution, S.J. Res 57, clarifies that a number of bureau guidance documents may be considered rules for purposes of the CRA, and therefore the bureau must submit them for review by Congress.

Senator Sherrod Brown, D-Ohio, said Republicans, who have used the CRA to attack access to health care and worker and environmental protections, want to use a legal loophole to interfere with potentially thousands more federal decisions, potentially going back as far as 20 years.

“If they’re using the loophole to attack our basic right to equality, there may be no end to the other consumer protections they can repeal,” Brown said. “Big corporations can be free to take advantage of consumers with little to reign them in with.”

However, the CRA resolution does far more than just undo the bureau’s guidance on auto lending. It also prohibits the bureau from ever reissuing a “substantially similar” rule if a rule has been nullified by Congress unless specifically authorized to do so by law.

The aim is to extend the reach of the conservative Trump administration far beyond this current term and block rules for years that conservatives don’t like.

With this unusual use of the CRA, it’s being reported that Republican leaders in Congress are making lists of agency rules they want to overturn. These “reviews” could go back to 1996 when the CRA was passed.

The action by Republicans is just another way they won't remake the nations’ institutions to favor corporations. Weaken consumer and environmental laws are the goal of President Trump, Republican leaders, and corporations, all to increase corporate profits at the expense of consumers.

To add insult to injury, Republican members are calling this devastating new “tool” a benefit for consumers.