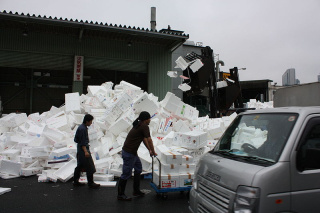 After years of debate and evidence collection, the World Health Organization or WHO has reclassified styrene from being a “possible carcinogen” to a “probable carcinogen.” Styrene is a chemical building block of polystyrene, the plastic material used to make styrofoam and many other plastic products.

"Styrene is in so many of the single-use containers that we use everyday, including foam cups and to-go containers, SOLO cups, and plastic lids,” said Kara Cook-Schultz, toxics director for U.S. PIRG Education Fund. “Now that WHO has shown that this stuff is a probable carcinogen, it's time to get it off the shelves and out of our homes."

In addition, Cook-Schultz thinks single-use plastic products made from polystyrene are also wasteful and unnecessary and are creating plastic waste even in the ocean.

“For decades, we’ve known that polystyrene is terrible for wildlife because it doesn’t biodegrade – hundreds of species have been found to ingest plastic fragments, often fatally,” said Alex Truelove, zero waste director for U.S. PIRG Education Fund. “Now, in addition to persisting in the environment for hundreds of years, we now know that the primary compound of polystyrene is probably carcinogenic. It’s yet another reason to get rid of the stuff once and for all.”

Earlier this week, the Environment America launched the Wildlife Over Waste Campaign to pass statewide bans on polystyrene containers.

“Nothing we use for five minutes should threaten public health and persist in the environment for hundreds of years,” said Truelove. “Safer and more sustainable alternatives already exist – it’s time to ban polystyrene containers.”