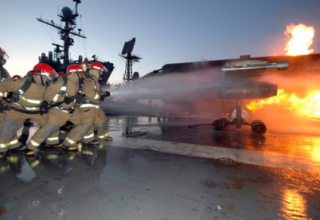 New York is suing 3M and five other companies to recoup at least $38 million the state has spent cleaning up environmental contamination caused by toxic chemicals in their products. The lawsuit alleges that the use of firefighting foams made by the companies at military and civilian airports in Newburgh and New Windsor, Southampton, Plattsburgh, and Rome resulted in contamination of soil, fish, and water by perfluorooctane sulfonic acid/perfluoroctane sulfonate or PFOS and perfluorooctanoic acid/perflurooctanoate or PFOA.

PFOA and PFOS contamination of the environment, and especially drinking water supplies, is a problem associated with firefighting and firefighting training at and military and civilian airports across the nation. The lawsuit is the first legal challenge brought by a state against the makers of firefighting products containing PFOA and PFOS to recover the costs of cleanup of releases of these chemicals from airports into the environment.

“The conduct of these manufacturers caused widespread contamination of our drinking water and our environment – and jeopardized the health of tens of thousands of New Yorkers,” Attorney General Barbara D. Underwood said.

The suit also alleges that, by the 1970s, all of the companies knew that PFOA and PFOS were mobile and persistent in the environment, accumulated in fish and other wildlife, and could be linked to severe harms to fish, wildlife, and people. In April 2006, 3M agreed to pay a penalty of more than $1.5 million to the U.S. Environmental Protection Agency for its failure to disclose studies dating back decades that confirmed the potential hazards of these chemicals to public health and the environment.

Sampling by the New York State Department of Environmental Conservation found concentrations of PFOA and PFOS in Lake Washington – a waterbody one mile southeast of Stewart Air Base and Stewart Airport and the primary drinking water supply for the City of Newburgh – as high as 282 parts per trillion. The EPA’s current public health advisory for drinking water recommends that concentrations of PFOA and PFOS not exceed 70 ppt. The toxic chemicals were found by DEC in groundwater at Gabreski Airport, former Plattsburgh Air Force Base, and former Griffiss Air Force Base at concentrations as high as 65,830, 1,045,000, and 61,233 ppt, respectively.

The DEC and the State Department of Health have tested public and private drinking water sources, groundwater, wildlife, and other resources in the surrounding areas for contamination. As a result, the DOH has issued a “catch and release” advisory to warn people about contaminated fish. DEC has also provided water treatment systems for public or private drinking sources, and bottled water or connections to uncontaminated drinking water sources for several communities. The agencies have also distributed public notices, offered public hearings, and made door-to-door home visits. DOH also has offered blood sampling for people living in some affected communities.

The state’s response to PFOA and PFOS contamination from the four airports have cost more than $38 million, and these costs are likely to continue to grow, said Underwood.