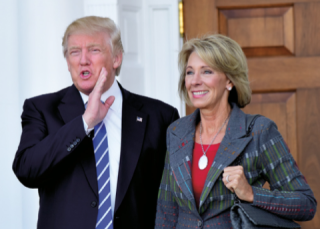 “The Trump administration’s DOA proposal to combine – and shrink – the departments of Education and Labor reveals its contempt for both the children and workers of America,” said Robert Weissman, president of Public Citizen, a consumer advocacy organization. “While it is true that the Trump Department of Education gets a failing grade, America’s kids do need a robust department – to advance pre-K education, to ensure all children attain a quality education, to enforce civil rights and disability rights laws, to prevent rip-offs by predatory for-profit colleges and much more.”

In addition, the proposed department reorganization is also meant to further undermine crucial protections for workers, not enhance them, Weissman said.

He said the Trump administration has an utter disregard for the missions of the two agencies and the key services and protections they should provide; an extremist ideology that aims to shrink and dismantle government without regard to consequences; and a belief that children and America’s workers are fodder for big corporations.

“The American people disagree, overwhelmingly, with the administration on each of these points,” Weissman said.

Since Trump took office, he actively has worked to undermine the departments of Labor and Education through budget cuts, hiring freezes, and reckless deregulation, said Lisa Gilbert, vice president of legislative affairs for Public Citizen.

“This disingenuous proposal is just the latest in Trump’s running list of broken promises to working people,” Gilbert said. “If it comes before Congress, lawmakers must place our next generation and workers first by flatly rejecting it."