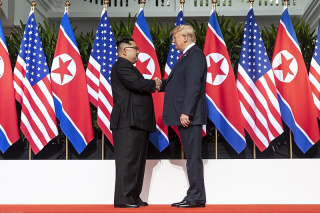 Trump said the United States would stop its war games in the area, which would save “a tremendous amount of money.” He talked about how expensive it is to send bombers from Guam to the Korean peninsula for the war games.

While it was hugely inappropriate for Trump to be talking about the cost of the military exercises following a negotiation on denuclearization and probably unwise for him to give Kim this victory so early in the negotiations, it also showed how skewed Trump and his administration are on government spending.

In addition to military exercises, Trump and his administration complain about the cost of children’s health insurance, Medicaid, environmental protection, the State Department, food stamps, Head Start, the FBI, the Justice Department, scientific research, Medicare, and much more.

The Trump administration is trying to slash government spending because it gave huge tax cuts that benefited corporations, not consumers, early this year. In his second budget proposal, Trump is proposing a 42.3 percent cut to all non-defense spending.

Meanwhile, the Trump administration has a record number of top government officials – Scott Pruitt, Steve Mnuchin, Ryan Zinke, Ben Carson, and Rick Perry – under investigation for misspending taxpayer money. Then there’s Trump himself, spending more than $13 million in his first year in office on travel expenses, including trips to his Mar-a-Lago estate in Florida and Bedminster, N.J. golf club.

Trump’s press conference was embarrassing. In addition to his uncalled-for remarks on government spending, Trump:

I was busy working on photos, so I didn’t want to get up and turn the TV off. It was so awful to listen to the press conference. I wish Trump would have had presidential-type remarks written for him, read them, and then gone home.