The worst chain restaurant meals for 2018 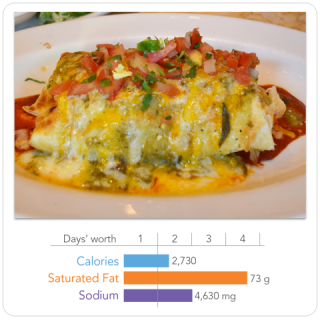 The Cheesecake Factory’s Breakfast Burrito is the “winner” of the 2018 Xtreme Eating Award for the Worst Way to Start the Day. It’s the nutritional equivalent of seven Sausage McMuffins from McDonald’s. The burrito is one of two Cheesecake Factory items among the awards issued for 2018 by the Center for Science in the Public Interest, a consumer advocacy group.

The Breakfast Burrito is a “warm tortilla filled with scrambled eggs, bacon, chicken chorizo, cheese, crispy potatoes, avocado, peppers, and onions, over spicy ranchero sauce” that is served with sour cream, salsa, and black beans, according to The Cheesecake Factory. The meal has more than a day’s worth of calories, 2,730; two days’ worth of sodium, 4,630 milligrams; and more than three days’ worth of saturated fat, 73 grams.

“Long gone are the days when a big restaurant meal was an occasional splurge,” said Lindsay Moyer, senior nutritionist for the center. “Americans are eating out more than ever before. So when restaurant chains are serving up 2,000 calories or more on a single plate, it’s easy to see why people continue to struggle with overweight, obesity, and diet-related diseases.”

Other 2018 Xtreme Eating Award winners include:

The Yard House Vampire Taco Combo comes with two 440-calorie tacos – each coated with crisped cheese and stuffed with pork, “bacon chorizo,” cream sauce, and guacamole – plus 610 calories’ worth of rice and beans. And some people order the Yard House’s signature 32 oz. Half Yard of IPA beer. With 2,040 calories, 27 grams of saturated fat, and 3,820 mg of sodium, the total is the equivalent of nine Taco Bell beef tacos plus three cans of Budweiser.

AMC’s Bavarian Legend Soft Pretzel weighs in at a pound and a half of mostly white flour, with tubs of nacho “cheese” and mustard for dipping. The nine-inch-wide pretzel has a day’s calories, 1,920; three-quarters of a day’s saturated fat, 15 grams; and more than three days’ worth of sodium, 7,600 m.g. That makes it saltier than any other 2018 “award winners.”

Chili’s Honey-Chipotle Crispers & Waffles – battered fried chicken on top of Belgian waffles, topped with bacon, jalapeños, and ancho-chile ranch sauce – is served with fries and honey-chipotle sauce. This chicken and waffles dish is like eating five Krispy Kreme glazed doughnuts smothered in 30 McDonald’s Chicken McNuggets and five packets of barbecue sauce. It delivers more than a day’s calories, 2,510, plus a two-day supply of saturated fat, 40 grams, and sodium, 4,480 m.g. Added sugars are an estimated two days’ worth, 105 grams.

The full list of “winners” for Worst Adapted Pizza, Worst Makeup, Worst Visceral Effects, and other categories is available at cspinet.org/xtreme-eating-2018.

This is the first year since the center began offering the Xtreme Eating Awards in 2007 that calories are mandatory on menus and menu boards at chains with 20 outlets or more. The labeling requirement was included in the Affordable Care Act of 2010, but the regulations to carry out the requirements were delayed several times over the years by the U.S. Food and Drug Administration. The center and Earthjustice sued the agency over the most recent delay and negotiated an agreement with the Trump administration for a start date of May 2018.

“Fashioning a ‘pizza’ out of chicken parmesan and topping it with pasta in Alfredo sauce is what passes for innovation at chains like The Cheesecake Factory,” said Moyer, about the chain’s second 2018 winner, the Chicken Parmesan Pizza Style. “Perhaps now that calories are on the menu for all to see, America’s chain restaurants will compete to create healthier dishes, rather than simply mashing up two or more junk foods.”

I love that we have calorie counts posted at chain restaurants in California. It has prevented me from indulging so many times. I usually try to split a meal with someone because they're doled out for an army and not an individual. I will definitely avoid that breakfast burrito. Jeez!

The calorie counting labels are now required in all chain restaurants with more than 20 stores nationwide. In California, do all restaurants have them?