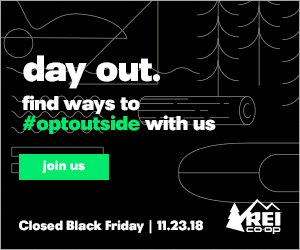 For the fourth year this Black Friday, REI Co-op will close its 153 stores, process no online payments, and pay more than 12,000 employees to #OptOutside with friends and family. Since 2015, 15 million people and more than 700 organizations have joined the #OptOutside movement.

This year, REI is also pledging $1 million to support the launch of a center at the University of Washington that will study the link between human health and time spent outdoors.

“The best data we have says that, in any given year, 150 million Americans don’t spend any time outside,” said REI CEO Jerry Stritzke. “That’s half the country. Day in, day out, we’re looking down instead of up, looking at our phones instead of the world around us. We’re asking people this year to reevaluate that picture of themselves. To see technology as the starting point to a journey outside, not the destination. And to go explore the world with someone they love – on Black Friday and every day.”

Among the findings so far:

“The best researchers in the world are proving the case that getting outside is critical to our mental and our physical well-being,” said Stritzke. “It’s time to rethink time outdoors as a must-have, not a nice-to-have.”