Home About Newsletter Categories Donate
The holidays begin for baby boomers
On Giving Tuesday, choose careful which charities or organizations will get your donations

What are your favorite stores for holiday shopping? 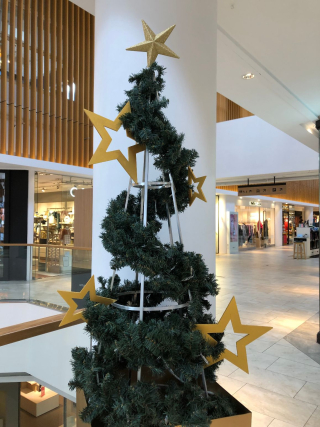 On Sunday, I went to the outlet mall with my daughter and her teenage son to buy his Christmas presents. Now that he’s a teen, he wants clothes for Christmas – and he wants to pick them out.

We went to Adidas. He bought a pair of sweats and we picked out a t-shirt for him also because the Black Friday deal was 25 percent off on the second, less costly item.

Next, we went to Nike. He picked out a pair of running shoes and a sweatshirt. My daughter was excited to find a rain jacket she could wear when running. And, she found a sweatshirt she liked. The deals were better Adidas. Thirty percent off on everything.

The third stop was at the store for my grandson’s sports team. He bought a coral-colored hoodie there.

It was a boring shopping trip. The shops were filled mostly with gray, black, and navy blue clothes. I looked longingly at the pretty patterns and bright colors when we passed by the women’s stores. Later, my daughter said.

My favorite stores for holiday shopping are:

Amazon. My family members live far away, so it’s easy to get their request lists and have presents sent to their homes.

REI. My daughter likes items from REI, so I order presents for her and her family from there.

Walgreens. I order photos for the holidays there to give to family members. I want to order cups with some of my best photos on them, but I haven’t gotten it done early enough yet.

Costco. For the last couple of years, I’ve ordered my Christmas cards from Costco. It has a better selection than Walgreens. Be careful, however, if you get your cards there. This year, I didn’t read the fine print and accidentally checked the card stock box. Those cards are more expensive and it takes a week to get them. Fortunately, the cards hadn’t been printed yet, so the $30 was refunded. My cards on photo paper cost $13, and I was able to get them later that evening.

Michaels Stores. One year I made gift baskets for my friends. I was able to find huge sheets of cellophane to put over them.

Joann. Frames for photos are often on sale there. I also buy card stock for the greeting cards I sell featuring my photos.

The Library. It has used books for sale that occasionally make good presents.

Safeway. I get my wrapping paper and gift tags there.

Wagner’s Bakery. I buy fruitcake there because I like it and I don’t make it anymore. I usually wait until after Christmas when the price goes down. Unfortunately, the workers were rude to a friend and me when we went there for a birthday celebration in May. I was never able to reach the manager about it. Every time I called, the staff said he wasn’t in. However, I did do an online review or email, which the staff saw. Hopefully, I can get in and out with a fruitcake and avoid the rude people.

What are your favorite stores for holiday shopping? Let me know in the Comment section below.