Number of renters 60-plus up 43 percent in a decade 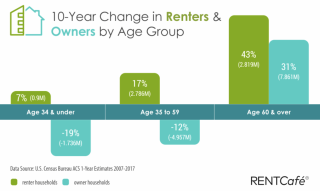 As the baby boom generation gets older with 22 percent of the nation now 60-plus, the number of older adults renting, rather than owning their own homes, is increasing. Renters households aged 60 and up increased 43 percent, from 6,550,000 in 2007 to 9,370,000 in 2017. This growth was more than younger renter groups.

In more than 300 cities analyzed, 24 cities have larger numbers of older adult renters over 60-plus years of age than young renters under 35 years of age.

In a study analyzing the growth of renters 60-plus across the United States since 2007, RENTCafe.com, an apartment news website, found:

The number of renter households aged 60-plus could continue to swell, according to RENTCafe.com data projections, reaching around 31 percent of the rental market by 2035.