Home About Newsletter Categories Donate
As credit card debt reaches a record high, do you need help getting out of debt?
Working toward a plastic-free life

Under Trump, enforcement of consumer financial laws drops sharply, especially in areas with the highest complaints 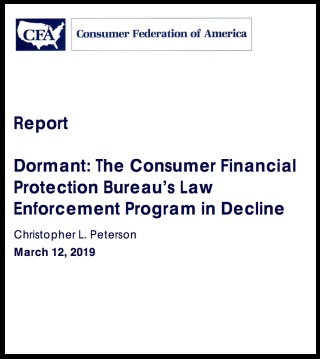 The number of publicly announced enforcement actions under the Trump administration at the Consumer Financial Protection Bureau is dropping sharply, according to a report by the Consumer Federation of America.

“Law enforcement activity at the CFPB has dropped precipitously under the Trump Administration’s leadership,” said Christopher Peterson, director of financial services for the federation and author of the report.

The bureau is charged with enforcing federal consumer financial law and bringing legal action against companies that violate that law. The bureau also has the authority to seek restitution for consumers and levy fines when it finds violations. The report finds that activity in both of these areas is on the decline – overall enforcement activity is down by 80 percent from the bureau’s peak in enforcement actions in 2015 and average relief to victims is down by 96 percent per case.

More findings include, under the Trump administration, law enforcement has declined sharply on:

In addition, the bureau has failed to:

“It is simply unacceptable for a consumer protection agency to turn its back on consumers that have been harmed by their financial institution’s deceit,” said Peterson. “Consumers have a right to expect that the federal government will enforce our consumer protection laws.”