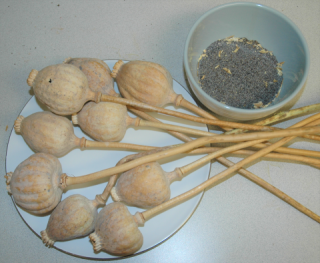 The U.S. Food and Drug Administration and the Drug Enforcement Administration need to crack down on the sale of contaminated poppy seeds and seed pods following the death of 12 Americans, the Center for Science in the Public Interest said.

Opiates such as morphine and codeine occur naturally in the opium poppy, which is why it can’t be grown in the United States. The DEA classifies “poppy straw” — all parts of the poppy plant other than the seeds — as a Schedule II controlled substance. While selling and importing poppy seeds is legal, seeds can become contaminated by poppy straw and sap in the fields and during processing. Importing contaminated poppy seeds is illegal.

Opiate contamination can be reduced to safe levels by washing and drying the seeds. However, potentially contaminated poppy seeds are available at several online retailers, including Amazon.com and eBay. Recipes for poppy seed “teas” can be found on websites such as Mercola.com and Chewworld.com.

“Poppy seed teas are responsible for numerous cases of addiction, overdose, and death,” said Peter G. Lurie, M.D., president of the center. “This little-known aspect of the opioid epidemic does appear to be worsening in terms of its toll. The FDA and the Department of Justice are aware of the problem but have failed to fully exercise their authorities.”

Stephen P. Hacala, a 24-year-old Arkansas man, died after drinking tea made from contaminated poppy seeds purchased on Amazon.com in 2016.

Mr. Hacala’s death is among at least 12 deaths from poppy tea reported in the United States since 2010.

Two new deaths occurred within the past few months: In December, a 44-year-old Utah woman passed away with poppy seeds ordered online found at the scene. Last month, a 46-year-old man died after brewing a mixture of poppy seeds and concentrated lemon juice. Shipping packages and phone records showed that he had ordered several bags of poppy seeds online.

“Stephen Hacala Jr. died from an opioid overdose because of a dangerous gap in our nation’s drug laws," said Cotton. "Despite government warnings, unwashed poppy seeds, which can contain lethal doses of morphine, are still available for sale online. As our country continues to fight the opioid crisis, it’s time to end sales of unwashed seeds so that no other families experience the pain the Hacala family has endured.”

The center also is urging the FDA and DEA to conduct random sampling and testing of poppy seeds sold by online retailers and at border posts, and to prioritize inspections of poppy seed distributors. In addition, the center is asking the FDA to issue guidance to the industry on good manufacturing practices to reduce opiate contamination in poppy seeds.