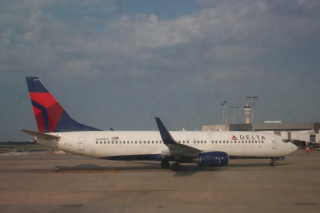 Delta Air Lines is No. 1, and JetBlue is No. 2, according to the 29th annual Airline Quality Rating released Monday.

Delta was the only airline to improve in all four categories. Six of the airlines rated performed better in 2018 compared to their 2017 scores. Those carriers were Delta, Hawaiian, JetBlue, Southwest, Spirit, and United. Airlines whose scores declined in 2018 were Alaska, American, and Frontier.

“Overall, another good year of the industry performance,” said Dean Headley, AQR co-author and emeritus professor of marketing at Wichita State University. “The best-ever industry AQR score for 2018 is largely due to improvements in the rate of involuntary denied boardings and the rate of customer complaints.”

The 2019 Airline Quality Rating is based on data collected during the 2018 calendar year.

Below is the 2019 ranking of the nation’s largest nine airlines, according to the Airline Quality Rating, with the 2018 ranking in parentheses:

The merger of Alaska and Virgin America was completed in April of 2018. The results for Alaska reflect the performance of the merged airlines for the entire year.

Hawaiian Airlines had the best on-time performance, 89.3 percent, for 2018, and Frontier had the worst, 69.4 percent.

Eight airlines improved their denied boardings rate in 2018. JetBlue recorded the largest improvement, and Frontier had the largest increase in the rate of denied boardings. Delta, 0.00, Hawaiian, 0.0, JetBlue, and United are the industry leaders in avoiding denied boarding incidents. Industry performance was better in 2018, 0.14 per 10,000 passengers, than it was in 2017, 0.34.

The industry performance is the lowest rate of involuntary denied boardings since the Airline Quality Rating started in 1991.

The industry performance is the lowest rate of mishandled baggage since the Airline Quality Rating started in 1991.

The number of complaints received by the department was down by 23 percent in 2018 compared to 2017 numbers.

So if they're so good, why I am still a nervous flier?

I always love Southwest and had the worst experience flying American. Dirty plane and bad service. Sounds about right to me.

Well, I think the airlines are about all the same. The ratings show that show are a bit better than the others.

I like Southwest, too. Too bad it doesn't fly to Europe, where I go twice a year.