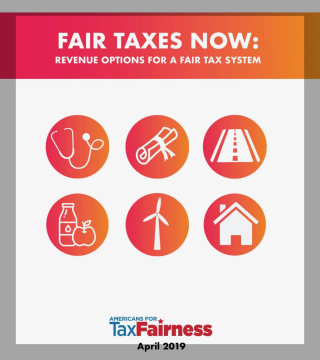 I’m happy I got my taxes mailed on Saturday. I’m not so happy my refund has gone down substantially. I hope you were able to get your taxes done on time or file for an extension.

I used TurboTax again, which turned out O.K., unlike H&R Block, which wouldn’t give me an estimate on how much it would do my taxes until they were done.

For free items to get on Tax Day, see Dealnews.com’s The Best Tax Day Freebies to Get Today.

For information on the tax breaks for the wealthy and corporations included in the Trump-GOP 2017 tax law that should be amended or repealed see Americans for Tax Fairness’ report “Fair Taxes Now: Revenue Options for a Fair Tax System.” It recommends:

The report and the online calculator show that there are many credible ways to raise substantial revenue to protect critical services and make new investments, Clemente said.

These corporations paid no taxes in 2018, according to the Institute on Taxation and Economic Policy:

Contact your members of Congress and ask them to close tax loopholes for the wealthy and big corporations.

So, until next year, when we go through tax time again.

All those corporations spend it on lobbying instead. See how well that's worked for them?

I agree with you, I think we'd be better off w/ income tax rates similar to those of Eisenhower's time. I mention his administration as he was a member of the GOP, just like Terrump & McConnell are.

Unfortunately, under Trump, lobbying is working very well for corporations. They're paying less taxes, so now the Republicans are going to cut government services after Trump said he wouldn't.

These are troubling times, but it's good that there are organizations such as Americans for Tax Fairness and the Institute on Taxation and Economic Policy to inform us about corporate wrongdoing.