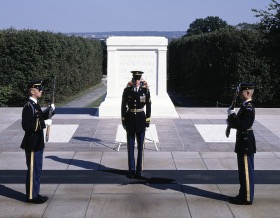 Three years after the Civil War ended on May 5, 1868, a Union veterans’ organization leader established Decoration Day on May 30. It was a time to decorate graves of the war dead with flowers. In many places, tributes to the Civil War dead had already occurred in the spring.

By 1900, ceremonies were being held on May 30 across the nation. The name of the holiday gradually shifted, with Memorial Day becoming more popular in the 1900s.

After World War I, Memorial Day was expanded to honor those who died in all American wars.

Congress and President Lyndon Johnson declared Waterloo, New York, the "birthplace" of Memorial Day in 1966. Congress declared Memorial Day a national holiday in 1971. Also, rather than May 30, it was placed on the last Monday in May. This year, Memorial Day is May 27.

Since 2000, people throughout the country have been asked to join in a moment of remembrance at 3 p.m. local time. Bells are tolled. Flags are flown at half-mast until noon, to denote a day of mourning.

More than 135,000 people visit Arlington Cemetery in Virginia throughout the Memorial Day weekend. A wreath will be laid at the Tomb of the Unknown Soldier. More than 280,000 flags are placed on the graves at the headstones.

Many communities offer Memorial Day events, some on May 30.