Do you pay hidden fees? 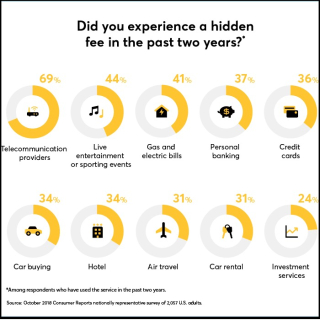 Every month as part of my Comcast TV package, I pay Comcast $10 for sports programs that I never watch. That’s $120 a year. It’s so irritating.

Most of the 3,480 Americans who wrote to Consumer Reports over the past 13 months, as part of the organization’s “What the Fee?!” campaign, are angry about the growing number of fees showing up on their bills.

At least 85 percent of Americans have encountered an unexpected or hidden fee over the past two years for a service they’d used, according to a Consumer Reports survey of more than 2,000 U.S. adults. And two-thirds of them say they’re paying more now in surprise charges than they did five years ago. Almost everyone – 96 percent – finds them annoying.

Today these extra charges are being added to more and more transactions – hidden in the fine print of a contract, popping up when you reach the last page of an online purchase, or combined with taxes or other costs.

In many cases, it’s possible to fight back against fees, and win, said Laitin.

For example, three out of 10 people in the survey who experienced a hidden charge in the past two years said they fought it – and almost two-thirds of those people said they were successful in getting the charge refunded or taken off the bill.

Recently in South Carolina, Duke Energy sharply scaled back a proposed 238 percent hike to the company’s fixed fee – the amount you have to pay regardless of how much energy you use – after customers, along with Consumer Reports and other groups, complained to the state utility commission.

Consumers are also battling against cable TV fees, which along with cell-phone and internet fees were the most commonly reported extra charge in Consumer Reports’ survey. Almost 140,000 cable TV subscribers around the country recently signed a Consumer Reports petition asking that cable providers eliminate add-on fees and advertise only the service’s total price.

For a typical American family, these fees can pose a financial strain, adding up to thousands of dollars a year in extra costs. On a national level, data from a few industries alone show that add-on charges are taking billions of dollars from Americans’ wallets every year.

In the case of airlines, for example, the two main travel charges – reservation change fees and baggage fees – cost $7.6 billion in revenue in 2018, up from $6.8 billion in 2015, according to the Bureau of Transportation Statistics.

For banks, overdraft fees are a growing source of revenue, with the largest banks receiving $11.5 billion in overdraft charges in 2018, up from $11.2 billion in 2015, according to an analysis of Federal Deposit Insurance Corp. data by the Center for Responsible Lending, a consumer financial advocacy group.

The hotel industry received a record $2.9 billion in resort fees and other fees and surcharges in 2018, with even more expected for 2019, according to Bjorn Hanson, Ph.D., a hotel consultant and adjunct professor at New York University.

What are the extra charges extra for?

The increase in add-on fees may come from the rise of online shopping websites such as Expedia and Hotels.com, which allow consumers to compare prices from many sellers and select the cheapest options. This has lower prices for many goods and services.

However, as companies work to become the lowest-price provider, they have an incentive to make their prices look lower, often by making a fee part of the cost, said Glenn Ellison, a professor of economics at the Massachusetts Institute of Technology who has studied online pricing. When disguised as fees, these costs may not be picked up by online shopping portal engines, though some websites may eventually capture them.

Add-on fees can be difficult to spot, requiring consumers to click through many web pages or read all the fine print to get the information – a strategy economists call drip pricing.

Few Americans have the time, energy, or desire to research a possible $30 fee, said Devin Fergus, professor of history, black studies, and public affairs at the University of Missouri and author of “Land of the Fee.”

Drip pricing works. “Once people have spent time searching a price, they are less likely to start over when they see the fees,” said Vicki Morwitz, a professor of marketing at the New York University Stern School of Business. “They often mistakenly assume competitors will have the same fees.”

This was shown in a 2018 study using data from StubHub, the third-party ticketing agency. In 2015 StubHub ran a pricing experiment, in which one group of shoppers was shown the full ticket price up front, including fees, and a second group saw those charges only at the end, when they made a purchase. People who saw fees at the back end spent almost 21 percent more than those who received all-in prices at the start.

Consumers also tend to make calculation errors when they add up the total cost of fees, according to a recent study by researchers at the University of Chicago and the Consumer Financial Protection Bureau.

My cable company makes me nuts. We have Spectrum and the initial package with a "deal" included the Internet, TV, and phone. We don't use the extra phone because we only use our cellphones. We've asked to take the phone off but it would actually make the charge higher. Makes no sense at all. Why should I pay for something I don't use?

A thing to consider: The government position on cell phones isn't that they're safe, what the FDA says is it hasn't been shown yet that they're harmful. It's good to continue to use your landline as much as possible. It isn't known what harm may be caused by putting a radio transmitter next to your brain for extended periods of time.

Didn't Congress refuse to pass a airline ticket pricing "transparency" bill a year or two ago? Because the airlines objected, and pleasing corporations rather then protecting the public is more important to Congress.