Don’t eat undercooked beef or soft cheeses made from raw milk, consumer group advises, because inspection laws allow meat and poultry contaminated with salmonella to be sold to the public 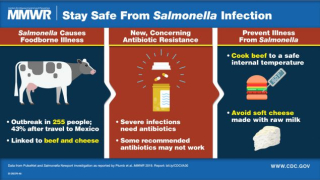 The Centers for Disease Control and Prevention issued a report Thursday describing an ongoing investigation into an outbreak of illnesses caused by a multi-drug resistant strain of Salmonella Newport.

Between June 2018 and March 2019, the CDC identified 255 cases in 32 U.S. states, which resulted in at least 60 hospitalizations and two deaths. The investigation is continuing, and agencies are recommending that consumers avoid undercooked beef and soft cheeses made with raw milk.

Consumer advocates are concerned that the outbreak may spread, because food safety regulators continue to allow companies to sell beef contaminated with the strain of Salmonella Newport in the outbreak, said Thomas Gremillion, director of food policy at the Consumer Federation of America.

The U.S. Department of Agriculture’s Food Safety Inspection Service has detected the outbreak strain, or “closely related” strains, in three samples at one or more Texas slaughter and processing facilities. However, under current regulations, the agency doesn’t consider beef containing these pathogens to be adulterated, or prohibit it from being sold to consumers.

“Under existing law, FSIS could treat Salmonella strains like this – ones that have caused a foodborne illness outbreak – as adulterants,” said Gremillion. “That would mean companies would have to hold, or recall, meat that is found to be contaminated with pathogens that genetically match the ones making people sick, and industry would have a much stronger incentive to minimize how much of these dangerous, antibiotic resistant bacteria end up in the raw meat and poultry sold to consumers.”

During rulemaking that ended in 2014, FSIS rejected consumer advocates’ calls for stricter regulation of foods contaminated with outbreak strains of Salmonella.

Instead, the agency has required epidemiological, microbiological, and trace back evidence to determine that a product is “associated with” or “linked to” an illness outbreak. Critics have argued that this policy has resulted in prolonged periods of inaction, even when the evidence seemed to leave little doubt as to the source of the illnesses.

FSIS hasn’t indicated any plans to revisit its position on Salmonella contamination in meat and poultry.

In its report, the CDC said further investigation is needed to track the Salmonella Newport strain in U.S. and Mexican cattle, and to identify measures to prevent transmission among cattle.

Consumer advocates agree, but point out that that these efforts will be hampered by another problem in the meat and poultry inspection system.

“Food safety regulators at FSIS do not have the authority to test for pathogens at feedlots and stockyards where these pathogens are most likely to spread,” he said. “The only regulators with that sort of ‘on-farm’ authority have a narrow mandate to protect against the spread of plant and animal diseases. To protect humans, USDA cannot leave the slaughterhouse. The results are tragic.”

On-farm use of antibiotics may have contributed to the outbreak, according to the CDC. In the report the agency said “the reported 41% rise in macrolide [a class of antibiotics] use in U.S. cattle from 2016 to 2017 might have accelerated carriage of the outbreak strain among U.S. cattle.”

The report also said that “avoiding the unnecessary use of antibiotics in cattle, especially those that are important for the treatment of human infections, could help prevent the spread of [multi-drug resistant Salmonella] Newport.”

Unlike most Salmonella, the outbreak strain is resistant to azithromycin and ciprofloxacin, antibiotics commonly used to treat salmonellosis. The CDC estimates that one in three victims of the outbreak received an antibiotic that was ineffective.

To avoid getting sick, the CDC advises consumers to avoid eating soft cheese that could be made from unpasteurized milk, regardless of the source of the cheese.

“Make sure to wash your hands thoroughly after handling raw meat and poultry and that you do not cross-contaminate,” said Gremillion. “Use a food thermometer to make sure you reach a safe internal temperature. Don’t eat a hamburger unless it’s well-done.”