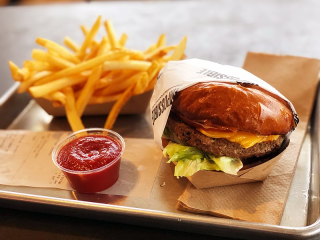 On Monday, I went with a group of colleagues to a local restaurant for a meeting. The menu said you could get an Impossible Burger for $2 more in any of its burger options. Knowing I was going to post the Consumer Reports reply to Impossible Foods’s article about them, I wanted to try one. However, I was told the Impossible burger wasn’t available. The company hasn’t been able to keep up with production to meet all the new demand. Disappointing.

Here’s the Consumer Reports statement on Impossible Foods’ beef with its critique:

In response to Consumer Reports’ recent article “Meat Gets A Makeover” focusing on plant-based alternatives to traditional beef burgers, Rachel Konrad – Impossible Foods’ PR chief – published an inflammatory and misleading attack on the motivations and methods behind our coverage of the safety of a key ingredient in the Impossible Burger. Oddly enough, she seems out for blood about an article that very fairly compares several plant-based alternatives based on taste, safety, and environmental impact.

At Consumer Reports, our first and only responsibility as a mission-driven nonprofit is to serve consumers. We provide accurate and factual product information that people can trust, and look out for consumer health and safety. That’s what we’ve always done, and that’s what we will continue to do, even when we get pushback on our findings. We are confident in our data, methods, and reporting – and proud of the historic results we’ve achieved in improving products, services, and the marketplace, saving countless lives in the process.

Ms. Konrad’s provocation questioning the credibility and independence of our reporting, our organization, and our scientists consists of unfounded statements combined with personal attacks in an attempt to intimidate and deflect attention from an important question that consumers deserve to have answered. This is why we believe a detailed response to her key arguments is necessary to truly set the record straight.

With due respect to Ms. Konrad, this is outlandishly false and misleading. While heme iron may have been around for a while, Impossible Foods itself acknowledges that soy leghemoglobin is proprietary and was created by the scientists at the company. Soy leghemoglobin did not exist in nature prior to Impossible Foods creating it. Our scientists also point out that it is not the case that consumers “consume heme every single day in virtually every food you eat.” For example, heme iron is not in any fruits, vegetables, milk, or eggs.

In conclusion, we support healthy plant-based options for consumers and appreciate efforts to innovate to address global systemic issues of sustainability and climate change, and we respect the role that technology can play in developing new and unexpected solutions to that challenge. However, Consumer Reports’ first – and only – responsibility is to be an unrelenting voice for the health and safety of consumers for today and tomorrow. And to do anything less would be impossible.