Home About Newsletter Categories Donate
Match.com used fake ads that tricked consumers into paying for subscriptions, FTC charges
What you need to know about loot boxes in computer games

Corporations keep breaking the law due to declining federal prosecutions 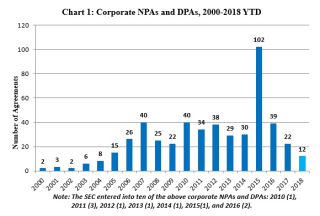 Corporations keep breaking the law, and the U.S. Department of Justice keeps refusing to prosecute them, a Public Citizen report finds. The DOJ’s continued refusal to bring criminal prosecutions against big banks, big pharma, and other big businesses that violate the law has led to a failure to deter repeat offenders, according to the report.

Instead of prosecuting corporations, the DOJ, starting in the early 2000s, has increasingly relied on agreements that prosecutors and corporate defense attorneys negotiate behind closed doors to keep corporations – usually the largest – out of the criminal justice system.

“If the Justice Department wants to deter corporate crime, it must stop bending over backward to protect corporations and start enforcing the law,” said Rick Claypool, a Public Citizen research director and author of the report. “Our country is facing an unprecedented corporate crime wave. To stop it, we must prosecute corporate criminals.”

Under President Donald Trump – who said he would be a “tough on crime” president – corporate prosecutions have plummeted to the lowest level in more than 20 years. Corporate lenience agreements – deferred prosecution and nonprosecution agreements – however, are on the rise again. The DOJ under President Barack Obama also made a large number of these deals with corporate wrongdoers and was criticized for its lenience to corporations by congressional Democrats as well as Republicans, Claypool said.

Among the report’s findings:

“As profit-maximizing, risk-calculating organizations, big corporations are highly responsive to incentives and punishments,” said Robert Weissman, president of Public Citizen. “If corporations know they can commit crimes and – if caught – be required to do little more than promise not to violate the law in the future, it is a virtual certainty they will break the law regularly and routinely.”

If the nation wants corporations to follow the law, then it’s past time to do away with deferred and nonprosecution agreements, Weissman said.

Major corporations that are reportedly currently under criminal investigation by the DOJ include:

Corporations that have already resolved criminal investigations with a deferred or nonprosecution agreement in 2019 include Walmart, Merrill Lynch, and opioid manufacturers Insys Therapeutics and Rochester Drug Cooperative.