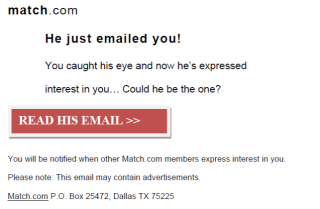 The Federal Trade Commission is suing online dating service Match Group, the owner of Match.com, Tinder, OKCupid, and other dating sites, alleging that the company used fake love interest ads to trick hundreds of thousands of consumers into buying subscriptions on Match.com.

The FTC also alleges that Match exposed consumers to fraud. In addition, the agency alleges Match offered false promises of “guarantees,” failed to provide services to consumers who weren’t successful in disputes, and made it difficult for users to cancel their subscriptions.

“We believe that Match.com conned people into paying for subscriptions via messages the company knew were from scammers,” said Andrew Smith, director of the FTC’s Bureau of Consumer Protection. “Online dating services obviously shouldn’t be using romance scammers as a way to fatten their bottom line.”

Match responded in a statement: The issues the FTC is focusing on have either been taken grossly out of context or permanently eliminated by Match. In several instances, the FTC is wildly overstating the impact of fraudulent accounts.

“For nearly 25 years Match has been focused on helping people find love, and fighting the criminals that try to take advantage of users,” the organization said. “We’ve developed industry leading tools and AI that block 96% of bots and fake accounts from our site within a day and are relentless in our pursuit to rid our site of these malicious accounts. The FTC has misrepresented internal emails and relied on cherry-picked data to make outrageous claims and we intend to vigorously defend ourselves against these claims in court.”

Match allows users to create Match.com profiles for free, but won’t let users respond to messages without paying for a subscription. Match sent emails to nonsubscribers saying that someone had said they were interested in them, according to the FTC’s lawsuit. When nonsubscribers with free accounts got likes, favorites, emails, and instant messages on Match.com, they also received emailed ads from Match encouraging them to subscribe to find out who the sender was and what he or she had to say.

The FTC alleges that millions of contacts that generated Match’s “You caught his eye” notices came from accounts the company had flagged as likely to be fraudulent. However, Match prevented existing subscribers from receiving these emails.

Many consumers bought subscriptions due to these deceptive ads, hoping to meet a real user who might be “the one.” The FTC alleges that instead, these consumers often would have found a scammer.

Many consumers who considered purchasing a Match.com subscription were unaware that 25 to 30 percent of its members who register each day are scammers, including romance, phishing, and extortion scams. In some months between 2013 and 2016, more than half of the instant messages and favorites that consumers received came from accounts that Match identified as fraudulent, according to the lawsuit.

Hundreds of thousands of consumers subscribed to Match.com shortly after receiving communications from fake profiles. From June 2016 to May 2018, Match’s analysis found that consumers purchased 499,691 subscriptions within 24 hours of receiving an ad touting a fraudulent communication, according to the FTC’s lawsuit.

Online dating services, including Match.com, often are used to find and contact possible romance scam victims. Fraudsters create fake profiles, establish trusting relationships, and then trick consumers into giving or loaning them money. Last year, romance scams ranked No. 1 on the FTC’s list of losses due to fraud. The FTC’s Consumer Sentinel complaint database received more than 21,000 reports about romance scams, and people reported losing a total of $143 million in 2018.

The FTC alleges consumers often were unaware they’d need to comply with additional terms to receive the free six months Match promised. As a result, consumers were often billed for a six-month subscription to Match.com at the end of the initial six months, instead of receiving the free six months of service they expected.

Due to Match’s allegedly deceptive advertising, billing, and cancellation practices, consumers often disputed charges through their financial institutions. The complaint alleges that Match then banned these users from accessing the services they paid for.

The FTC alleges that Match violated an online shoppers’ law by failing to provide a simple method for consumers to stop recurring charges from being placed on their credit cards, debit cards, or bank accounts. Each step of the online cancellation process – from the password entry to the retention offer to the final survey pages – confused and frustrated consumers and prevented many consumers from canceling their Match.com subscriptions, the FTC alleges. The lawsuit states that Match’s employees described the cancellation process as “hard to find, tedious, and confusing” and said that “members often think they’ve cancelled when they haven’t and end up with unwanted renewals.”

The idea of finding love online is a scary thought although I've heard of some successful outcomes. Good to know about Match.com. I'd be interested in knowing which other sites are suspect.