Eating organic food for a week can reduce pesticide levels in the body, study shows 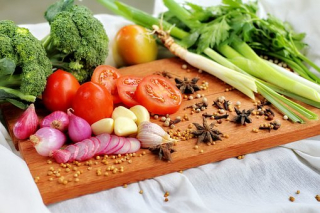 I buy most of my food at my local food co-op, with as much as possible of it being organic. I have immune system problems, so organic food is helpful to me.

This recent study adds to the evidence of how organic food benefits people.

A study done at the University of California found that eating organically-grown food for one week can significantly reduce the levels of pesticide in the body. Researchers found the levels of toxins decreased by an average of 60.5 percent after six days of eating organic food.

Exposure to pesticides has been linked to many adverse health outcomes including asthma, infertility, hormone imbalances, autoimmune disorders, and impaired cognitive development.

The study followed four families from throughout the United States – Oakland, Minneapolis, Baltimore, and Atlanta. For days one through five, participants ate as they normally would. Then, for days six through 11, they followed a strictly organic diet. This meant that everything was organically-produced including organic oils, condiments, and spices.

“This study shows that organic works,” said Kendra Klein, Ph.D., co-author of the study and a senior scientist at Friends of the Earth, an environmental organization. “We have the right to food that is free of toxic pesticides. Farmers and farm workers growing our nation’s food and rural communities have a right not to be exposed to chemicals linked to cancer, autism, and infertility.”

It's good news that more grocery stores, such as Safeway and Fred Meyer, are now offering organic food. Although it is still more expensive than conventionally grown food, the prices are coming down as consumption continues to increase.

I try to eat organic as much as possible. Our local grocery store has a great selection and we have farmer's markets. You still have to be careful to make sure it's certified. The easiest way is to stay away from packaged food as much as possible. It's full of bad stuff, for the most part.

Good for you. I'm glad that you're able to find organic food in your local grocery stores. Aren't farmers markets wonderful? We have a really good one here.

I'm glad that this study came up. I knew about the link between pesticide exposure and non-Hodgkins lymphoma. However, I did some more research and found that pesticides are linked to many different kinds of cancer including ovarian cancer.

It's terrible that the federal government does such a poor job on regulating pesticides. In the U.S., pesticides can be used before their safety is determined. In Europe, they have to be shown to be safe before they're approved for use.

Vietnam veterans fought for years to have the VA pay service-connected disability benefits to veterans who developed non-Hodgkins lymphoma after/resulting from exposure to Agent Orange. It's now one of many disorders, etc., that have been accepted by the VA as causationally linked to exposure to Agent Orange (including spina bifida in children of exposed Vietnam vets). People living in the Suislaw National Forest (western Oregon) in the 1970's had their watersheds aerially sprayed with Agent Orange by the National Forest Service and subsequently experienced a high rate of miscarriages, birth defects (in humans, wildlife and livestock), and at least one woman who didn't smoke, ate organically, no history of cancer in her family, died in her 30's of metastasized breast cancer. The residents of the valley successfully sued the Forest Service for a violation of NEPA and were granted an injunction (still in force) against further spraying. For more information see: A Bitter Fog, Herbicides and Human Rights, by Carol Van Strum, updated edition released in 2014.

It's not just pesticides/herbides, it's exposure to TCDD (a type of dioxin, known to be extremely toxic, carcingenic, tetragenic, aka 2,3,7,8-TCDD, etc) that is a known by product/contaminant of the method chosen by Dow, et al, to manufacture the pesticides in Agent Orange.
2,3,7,8-TCDD is also produced when chlorine is used as a bleaching agent in the pulp & paper bleaching process ( as it is or was for years in the US, now a slightly less toxic chlorite compound is used==while the Swedes switched to a non-chlorine based paper bleaching process years ago). TCDD is linked w/non-Hodgkin's lymphoma as well.

It is found in the breastmilk of pretty much every woman in the US. It's a fat-loving compound. https://www.health.state.mn.us/communities/environment/risk/chemhazard/dioxins.html

In addition, many Vietnamese suffered and continue to suffer from the effects of exposure to Agent Orange and its contaminant/byproduct, TCDD. Vietnam has sought compensation from both the US and Monsanto. https://www.independent.co.uk/news/world/asia/vietnam-agent-orange-monsanto-victims-compensation-a8508271.html and https://www.independent.co.uk/news/world/asia/us-to-clean-up-agent-orange-in-vietnam-8027290.html

Thanks for posting details about Agent Orange. It's terrible that these harmful chemicals can be used in the United States with such little proof that they are safe.