Change the batteries on your smoke detector and CO alarm Sunday 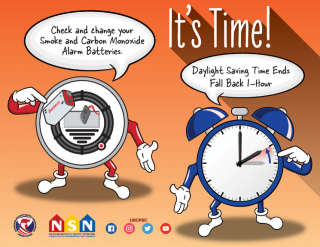 “Early warning is crucial to getting out of a house fire alive and for surviving CO poisoning,” Robert Adler, acting chair of the U.S. Consumer Product Safety Commission, said in an agency blog article. “I encourage everyone to check and change the batteries in their smoke and carbon monoxide alarms. Doing this can save you and your family in a fire or CO emergency.”

In 2018, a home fire occurred at the rate of one every 87 seconds, according to the National Fire Protection Association. From 2012-2016, the NFPA estimated that almost three of every five home fire deaths resulted from fires in homes with no working smoke alarms.In addition, the Centers for Disease Control and Prevention estimate more than 400 people die in the U.S. every year from CO poisoning.

The CPSC offers this advice on alarm placement: A smoke alarm should be on every level of your home, inside each bedroom, and outside sleeping areas. CO alarms should also be placed on every level of your home and outside sleeping areas. Batteries should be replaced in alarms, unless the alarms have sealed 10-year batteries. Replace your smoke alarms if they’re more than 10 years old.