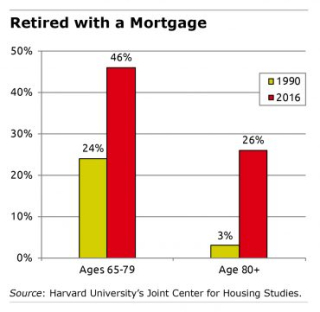 Retirement is different than it used to be. Many more retirees are still trying to pay off their homes.

One of four homeowners 30 years ago who were in their late 60s and 70s still had a mortgage. These days, nearly half have one. When people turned 80, mortgages used to be unusual, with just 3 percent being mortgage holders. These days, one in four of these older seniors have mortgages, according to “Housing America’s Older Adults 2019,” a report by the Harvard Joint Center for Housing Studies.

Seniors who have paid off their homes have more money to spend, which improves their standard of living in retirement.

The Squared Away Blog, written by the Center for Retirement Research of Boston College, reports on developments over the last 30 years that may explain why more older retirees have mortgages:

It’s a negative trend that the share of households age 65 and older that are paying more than 30 percent of their income for  – either rent or a mortgage – is at a record high.

Originally, paying off a house was the plan until 2008 happened. Now, there are a whole bunch of us renting.

I realize how out of touch I am with the situation. Thanks for sharing.

The financial market is changing. The structure of household income and expenditure has changed recently. People are looking for other opportunities to earn and invest their finances. In recent years, the demand for cryptocurrency has increased. On the website forex broker tenkofx https://tenkofx.co.za/ you can study the dynamics of the growth of the cryptocurrency market. In recent years, you can also see the growth of the forex market and the number of brokers.

Unless you're in TX or FL, if you end up filing for Chap. 7 bankruptcy because of say, medical debt, then you'll lose your home even if it's paid off--because the homestead exemption in so many states isn't enough to cover the (inflated) value of many homes.
Which reality may encourage older people to take out rip off reverse mortgages to pay off medical debt . . . .

Yes, the 2008 Recession changed a lot of things for boomers. For example the number of boomers ill prepared for retirement increased from 33 percent to 43 percent.