The Consumer Federation of America thinks the U.S. Department of Energy’s proposed determination that new lighting efficiency standards aren’t needed is wrong. The DOE’s justification for this rollback is riddled with factual errors and is based on seriously flawed assumptions and methodology, the CFA said.

The DOE’s decision to roll back money saving lighting requirements is based on analyzing only one single technology that is extremely and unjustifiably high in cost ($7/bulb), low in efficiency (only 34.5 lumens/watt), and has a short lifespan (1,000 hours), said Mel Hall-Crawford, CFA director of energy programs and special projects.

The best alternative available in the market is less than half the cost ($3/bulb), almost three times more efficient (88.9 lumens/watt), and lasts 15 times as long (15,000 hours). 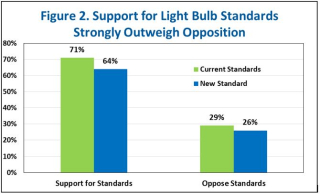 Had the DOE used today’s technology to evaluate the effectiveness of the standard, there’s no way the agency could justify not taking action, Hall-Crawford said.

“For the Department of Energy to fail to recognize the best and increasingly most prevalent technology when evaluating the merits of standards is simply gross negligence,” she said. “If the DOE had analyzed the lighting technologies available today, rather than only older high cost, low efficiency, short-life options, it would have concluded that a reasonable, performance based standard would save consumer billions while addressing climate change at the same time.”

The DOE’s faulty analysis assumes that more than one-third of consumers would behave irrationally and purchase inferior lighting technology over today’s energy efficient lights, Hall-Crawford said. However, even if consumers chose the older low-tech lighting options, and only one in 20 chose new technology, the benefit of staying with the standard would far outweigh the cost.

“It is important to note is that the agency has violated executive branch regulatory guidances issued over almost 40 years ago by the presidents of both parties which lay out the requirements by which regulations are to be considered and adopted,” Cooper said. “The failure to conduct sound benefit/cost analysis as part of the regulatory review is so egregious it has led the DOE to violate the underlying statue.”

DOE’s position is a function of its unrealistic and erroneous assumptions compounded with faulty analysis, he said.

“Had DOE performed a proper analysis, the consumer pocketbook benefits with a very reasonable lifecycle cost and a short payback period more than justify amending the energy efficiency standards for general service incandescent lamps,” Cooper said. “DOE’s rollback contradicts four decades of strong political consensus on the goals of the standards, as expressed by Congress in the original legislation, the Energy Policy Conservation Act, and the most recent amendments to the underlying law in 2007.”

DOE should withdraw its proposed determination, expand the coverage of standards for lighting products, and enforce the backstop performance standard of 45 lumens/watt as enacted by Congress, he said.