Home About Newsletter Categories Donate
Scammers already eying the money you’re going to get from the federal stimulus
Strawberries, spinach, and kale top this year’s Dirty Dozen list for pesticide residue, but raisins are worse 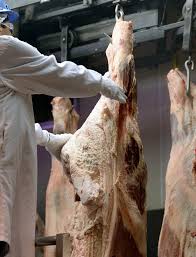 Tyson Foods received a waiver on Thursday from the U.S. Department of Agriculture’s Food Safety and Inspection Service from requirements for government inspectors at its Holcomb, Kansas beef slaughter plant.

Last summer, Tyson requested a regulatory wavier that would allow it to rely on company employees, rather than government inspectors, to conduct postmortem inspection activities, including identifying and trimming “isolated defects” and identifying conditions that would require additional disposition by a government public health veterinarian.

The Consumer Federation of America said it’s disappointed by the USDA’s action.

“When consumer advocates requested a copy of the waiver petition, USDA disclosed a heavily redacted document that gave little indication that the waiver would actually improve food safety,” said Thomas Gremillion, director of food policy for the federation.

Consumers also raised concerns that granting waivers on a piecemeal basis would thwart any attempt to measure the impact of these “modernization” reforms, Gremillion said.

“Now, FSIS appears to be using the global pandemic as an excuse to rush through this ill-conceived deregulatory plan,” he said.

For years, I’ve written about the meat industry’s continued, intensive efforts to reduce federal meat inspection, all while the most hazardous meat and poultry recalls, Class 1, are up substantially.

Another example of the industry’s successes is the USDA’s new rule for pork inspection, adopted in September 2019, which allows higher line speeds, fewer inspectors, and no microbiological pathogen performance standards.

Higher line speeds is a meat industry favorite that they’ve lobbied hard for over the years. With higher line speeds, employees aren’t able to do as good of job, such as cutting meat and removing tumors, and they experience a much higher rate of injury because they’re working with sharp knives and power tools.