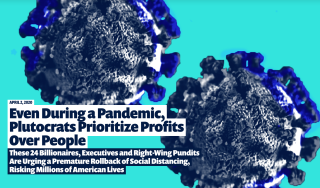 A group of billionaires, corporate executives, and conservative commentators has been urging the rollback of social distancing recommendations, despite public health warnings, a Public Citizen report shows. In arguing for a return to economic “normalcy,” the group ignores the devastating health consequences of its recommendations and the difficulty of returning to normal while the coronavirus pandemic rages on.

Public health experts have made it clear that by adhering to social distancing recommendations and requirements, Americans will prevent the crisis from becoming a catastrophe. One study warns that inadequate action could result in the deaths of 2.2 million Americans from the virus.

However, after a mid-March meeting with Wall Street executives, President Donald Trump held a press conference to announce he intended to push for a hastened end to the social distancing measures. Since then, a number of big business executives and conservative media joined the call, forcing the government’s top public health officials to intervene to postpone Trump’s rushed coronavirus deadline.

For example, Lloyd Blankfein, former CEO of Goldman Sachs, said “extreme” measures to curb the pandemic would “crush” the “economy, jobs and morale” and urged that lower-risk people return to work soon. Tilman Fertitta, a casino owner and proprietor of the Houston Rockets, has complained that his companies are “doing basically no business” and wants authorities to reopen businesses by mid-April.

Americans for Prosperity, a group founded by Charles Koch, the chairman and CEO of Koch Industries, also has pushed back against governors who have ordered the closures of nonessential businesses. Dick Kovacevich, former CEO and chairman of Wells Fargo, said about workers under 55, “We’ll gradually bring those people back and see what happens. Some of them will get sick, some may even die, I don’t know.”

Glenn Beck, a former Fox News host, has said, those “of us who are over 50 [should go in to work and] keep this economy going and working, even if we all get sick, I would rather die than kill the country.”

“As usual, Trump is inclined to rely on the advice of corporate executives and billionaires over public health experts,” said Rick Claypool, a Public Citizen research director and author of the report. “In this coronavirus crisis, listening to that advice could literally lead to millions of deaths.”

Claypool said that, thankfully, Trump backed off his pledge to “reopen America” by Easter.

“But it’s still a scandal that the billionaires’ advice was taken so seriously that the nation’s top public health experts had to force a course correction to avert that catastrophe,” he said.

See the report for what other billionaires, executives, and conservatives said about social distancing.