Stock up on protein foods on your next trip to the grocery store, because some meat processing plants are closing 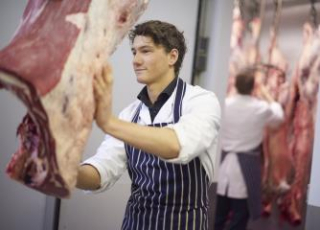 Around the United States, several meat processing plants are closing because workers are getting the coronavirus.

A Tyson Foods pork plant and a National Beef Packing slaughterhouse, both in Iowa, and JBS USA beef plant in Pennsylvania have closed, according to an article on National Public Radio.

The plant closings aren’t yet having a significant impact on the supply of meat to consumers, Christine McCracken, a meat industry analyst, was quoted as saying in the article.

This is what I’ve been worried about. However, I thought about the workers who made the canned green beans getting sick, not the workers in the meat processing plants.

So when you go the grocery store this week, buy fresh meat and poultry while it’s still available. And stock up on protein foods – canned tuna fish and chicken and eggs and cheese.

Meat and poultry production could be a problem during the era of the coronavirus in the U.S., because a limited number of large companies are responsible for its production. In addition, the importation of food into the U.S. could be reduced because other countries may keep their supplies or their workers could become ill, too. The U.S. gets about 20 percent of its food from foreign countries.

How did China manage its food resources during its coronavirus outbreak earlier this year?

It reallocated labor to ease bottlenecks and build reserves in areas where shortages could result, according to a New York Times article. For example, delivery and retail companies borrowed furloughed staff from restaurants and food service providers. Food production was shifted to areas less affected by the virus. Delivery routes were also redirected through those areas.

So, add protein foods to your supply of food when you order food or shop this week.

In Washington state, Gov. Jay Inslee extended the state’s stay home order until May 4. However, he did say, when asked by a reporter, that the date might be extended. Even if the order is lifted on May 4, my birthday, I think it’s likely it will be extended another month for seniors. That’s a lot of food to stockpile.