Home About Newsletter Categories Donate
Nelson and Lauki dressers and cabinets are being recalled by Herman Miller due to tip-over and entrapment hazards
Make sure to get price information about funeral cost, because some funeral homes failed to disclose it in undercover investigations 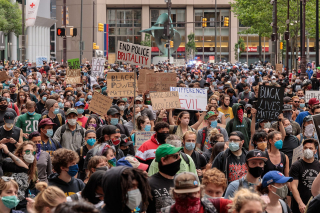 America is in turmoil. Millions of Americans are pouring out into the streets to protest the death of George Floyd, a black man who was murdered in Minneapolis, Minnesota, when a police office pressed his knee on his neck until he died. All this in the middle of the covid-19 pandemic.

I'm stressed. I don't know what's going to happen next. Police reform? I hope so. Millions more getting the coronavirus and thousands more dying of it? I hope not.

I've decided what I'm going to do in these challenging times is make a large contribution on an organization that works to improve my community, including working on homeless issues.

The Black Lives Matter protests are swelling throughout the nation. As she reached out to her friends of color, Carol Cassara of Heart·Mind·Soul has learned more about what it means to be an effective ally. In "How Much Do Black Lives Matter to You?" she relates an impactful dialogue she had with a female friend; one that made even more vivid what people of color face every day of their lives.

Jennifer Koshak of Unfold and Begin has been struggling with a lot of emotions lately; sadness, anger, and outrage, to name just a few. She was sickened by the casual way in which a cop murdered George Floyd, and while she doesn't know exactly what to say, she does have something to say.

Something that happened to Laurie Stone of Musing, Rants & Scribbles five years ago seems as relevant today as it did back then. She was in her neighborhood grocery store when she encountered a tall, middle-aged African-American man stocking shelves. He had a cart full of product and part of it blocked her way. She looked at him, smiling, saying, “Excuse me.” He turned and gazed at her, his eyes hard, face tight and unsmiling. And that’s when she saw it.

Rebecca Olkowski with BabyBoomster.com attended the American Travel Trends Forum online with guest speakers Peter Greenberg, Samantha Brown, Andrew McCarthy, and others. The tourism industry has been heavily impacted by the pandemic with over 100 million out of work. What does it need to do to come back? Rebecca reports on some of their thoughts and findings.

Quarantine, recession, protest marches. It has been a long week. But it is also summer and time to relax a bit and enjoy the season, the weather, the warmth. Meryl Baer of Six Decades and Counting obliges with an upbeat post about swim suits. Summer’s here and that means bathing suits.

Tom Sightings at Sightings Over Sixty had occasion to check on his Social Security benefits – which we all know can often be complicated and sometimes confusing. So he turned to financial guru Jeremy Kisner to find some important Social Security FAQ's ... which will answer (almost) any question you ever had about Social Security, including if and when it will go bankrupt.

These articles make up the Best of Boomer Blogs #653. Be sure to check out the articles and leave a comment. Boomer bloggers love to hear from readers.