Most Americans think owners should be able to deny service to those who don’t social distance, and a majority say they’re taking precautions in public spaces, survey shows 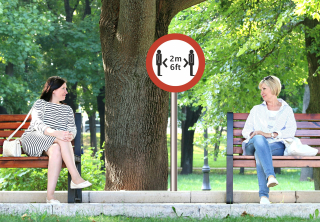 A majority of Americans, 75 percent, support states enacting legislation giving business owners the right to deny service to customers who don’t social distance, including 53 percent who strongly support the measures, according to a survey from Consumer Reports, a consumer testing and advocacy organization. About one in six oppose these measures, and another 9 percent are unsure.

The Consumer Reports survey was done between June 4 to 16, just before the surge in cases now occurring across America. It included questions on the pandemic’s impact on consumers’ attitudes, behaviors, and finances. The respondents said they were very concerned about the potential threat posed by covid-19 to their communities, and many reported taking some action to deal with the pandemic.

“Just prior to the current surge in cases across many parts of the country, most Americans were still very concerned about the continued spread of COVID in their local communities,” said Kristen Purcell, chief research officer for Consumer Reports. “And while a majority also told us they were following recommended safety measures most of the time, the survey data show sizable segments of the population were not adhering to CDC guidelines at that time. It’s not surprising then that many Americans would support measures to encourage greater compliance.”

At the time of the survey in early June, most Americans, 58 percent, say that from what they have seen, businesses in their local area are doing “about the right amount” when it comes to practicing and enforcing social distancing and safety measures. About a quarter say they are doing too little and 12 percent say they are doing too much.

Currently, without consistent guidelines and enforcement mechanisms, Americans are divided on who is mainly responsible for ensuring people follow social distancing guidelines in local businesses and restaurants, with 37 percent saying businesses are responsible for adherence and 36 percent saying it’s mainly up to customers. Another 8 percent say local government or law enforcement should be mainly responsible, while the same portion, 8 percent, say they don’t believe social distancing is necessary.

A majority of Americans, 76 percent, are concerned about the continued spread of the virus in their local area, including 41 percent who are “very concerned.”

The portion of Americans “very concerned” is unchanged since May. June continues to show levels of concern varying significantly across different racial and ethnic groups, with black, 58 percent, and Hispanic, 47 percent, more likely than white adults, 37 percent, to say they’re “very concerned” covid-19 will continue to spread in their community.

More black and Hispanic Americans are taking precautions than whites

A majority, but not all, people surveyed are taking safety precautions in public spaces.

Asked how often they’re following CDC-recommended safety guidelines when out in public, about three-quarters of adults who are visiting indoor public spaces say they’re wearing a mask “most of the time,” 21 percent, or “always,” 54 percent, while one in 10 report doing this “hardly ever or never.”

A higher percentage, 85 percent, say they’re maintaining a six-foot distance from others when out in public, though only 41 percent say they “always” do this while 44 percent say they do this “most of the time.”

Consumer Report’s June survey also showed that larger percentages of black and Hispanics than whites are preparing for future outbreaks by making changes in their lifestyles today.