Home About Newsletter Categories Donate
Off-road and utility vehicles are being recalled by Polaris due to crash hazard
Cars, home improvement top the list of consumer complaints for 2019, survey shows 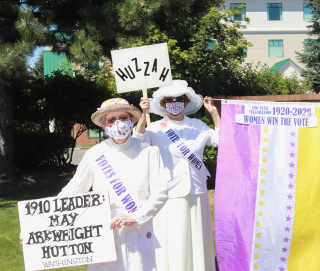 One of the big things that’s been canceled in my life due to the pandemic is all the celebrations that were being planned in my community to celebrate the 100th anniversary of women winning the vote in the United States. Events and parades have been canceled.

So, some scenes with themes were organized around town last week. A videographer recorded them and I took photos.

It was fun to get out and at least have some opportunity to celebrate this important event.

Here’s what boomers are writing about during pandemic times:

One of the problems faced by almost everyone during the past few months has been the shortage of basic household items. Toilet paper has been, perhaps, the most difficult, at times, to find. Meryl Baer of Beach Boomer Bulletin laments the shortage of toilet paper, and recalls the good old days of abundance.

As Tom Sightings at Sightings Over Sixty explains in “We've All Canceled Plans,”  he's had to cancel travel plans this summer. Have you?

Laurie Stone of Musings, Rants & Scribbles saw a poignant sight recently. A little restaurant near her home had converted part of its parking lot to an outdoor eating space. Tables were set and socially distanced. It was about 5 p.m. Raindrops started falling on her windshield as she sat watching, waiting at a stoplight. One of the waitstaff started scrambling to gather up napkins and menus. Most likely, no dinner shift for them tonight. Her heart broke a little.

Over at A Healing Spirit, Carol Cassara admits she's had to work hard to find peace and perspective during these trying times. In "The Rocky Route From Prayer Flags to Perspective," she shares her thoughts about the need for us to manage through this together.

It’s exciting when a woman over 60 decides to get out of her comfort zone and do something she’s never done before. Tracey Thomas decided to make a documentary film in which she asked other baby boomers what they thought about aging. During filming, her cameraman/boyfriend passed away and the film took another turn. Rebecca Olkowski, with BabyBoomster.com, interviewed her about her journey making “My First and Last Film.”

This is the Best of Boomer Blogs #660. When you take a look at the articles, be sure to join in the conversations. Boomer bloggers love to hear from readers.

Thanks for the roundup, Rita. Great posts.