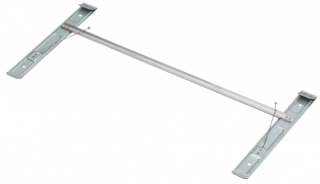 Lithonia Lighting is recalling about 318,500 CFMK surface mount brackets used with CPANL LEDs in the United States and about 11,600 in Canada.

The brackets can fail to securely surface mount the CPANL LED and fall unexpectedly, posing a risk of injury from impact.

The firm has received 24 reports of CPANL LEDs coming loose or falling from the CFMK bracket, resulting in one injury.

This recall involves metal CFMK H-brackets that are screwed into the ceiling and used to surface mount CPANL LED fixtures. The CFMK bracket was included as an optional mounting accessory with 1x4, 2x4, and 2x2 CPANLs sold by retailers. It was also available as a separate accessory for CPANL LEDs sold by commercial distributors.

The brackets were sold at Lowe’s Stores and other home improvement stores nationwide and online at Lowes.com from August 2018 through June 2020 for CFMK brackets included with CPANL LEDs for between $85 and $100. They also were sold at commercial electrical distributors from January 2019 through June 2020 for CFMK Brackets as a separate accessory for commercial CPANL LED applications for about $12.

Consumers should immediately stop using CPANL LEDs surface mounted with a CFMK bracket and contact Lithonia Lighting for a free CFMK bracket repair kit, the company and U.S. Consumer Product Safety Commission advise. Consumers should prevent people from going into the immediate area under the fixtures until the brackets are repaired.

For more information and to order a free repair kit, call Lithonia Lighting at 855-307-2454 from 8 a.m. to 5 p.m. ET Monday through Thursday or visit lithonia.acuitybrands.com and click on “CFMK Recall” on the bottom of the page.