How to make a sugar-free, gluten-free berry cobbler

For decades, I’ve been working on cutting sugar out of my diet. It’s a worthy goal because more and more research is coming out about how harmful sugar is to health.

I’ve made sugar-free raspberry pie for years. You make a pie crust with olive oil, pat it in a pie plate, thicken the raspberries, sprinkle some of the crust on top, and bake.

But lately, I’ve had a yen for raspberry cobbler. I tried three recipes. The first one was O.K., the second one was a disaster, and the third one worked like a charm.

Late last year, I started on the FODMAP diet to reduce bloating. It’s gluten free, so I’ve been learning more about flours other than wheat. 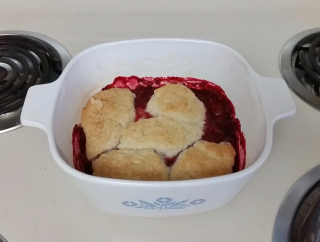 It was O.K. I used a Paleo recipe. The filling was runny, and with just raspberries and no sugar, it was too tart. I used almond flour for the topping. It tasted good, but I would have liked to have more topping. 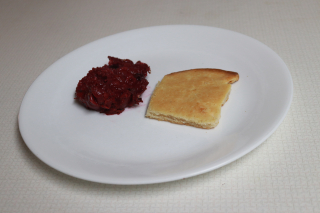 It was a disaster. I tried to make a larger recipe, but I made a mistake somewhere in my calculations. I wanted more cobbler, so I increased the amount of raspberries. I didn’t measure them exactly, but estimated I had 6 cups. I increased the thickening, because recipe No. 1 was runny.

For the topping, I used almond flour again, because it tasted good. I tried putting together a couple of recipes. I had 1½ cups of almond flour and my calculations said 1½ cups of milk. I should have realized that didn’t sound right. Instead of looking at what I was doing and only pouring in part of the milk, I poured in the entire amount. It looked even thinner than pancake batter.

I threw in more flour and more baking powder and stuck it in the oven, hoping for the best. I had extra topping, so I greased a cookie sheet and baked it. That’s what in the photo.

I kept cooking and cooking the cobbler to get the topping done.

The berries were really thick and the topping thin and not flaky. 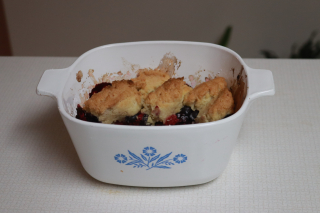 It turned out great. Here’s the recipe:

4 cups of berries (I used 1 c. raspberries, 2 c. blueberries, and 1 c. strawberries. Raspberries are too tart without any sugar.)

I’m glad I figured it out. The topping is so flaky and good. I have about 20 pints of frozen raspberries in my freezer, so I'll be able to make lots of berry cobbler.

There are some parts of Europe where wheat was expensive, so cooks developed recipes using other types of flours, for example: the chestnut-flour cake--which has no added sugar. 2 1/3 cups of chestnut flour, 4 Tablespoons of olive oil, salt, 3/4s cup raisins, soaked in water, then drained, 3/4 cup pine nuts, sprig of rosemary chopped. Put chestnut flour in blendeer, gradually blend about 2 cups of water. Add 2 Tbs of the oil, pinch of salt, the raisins & 1/3 cup of pine nuts, most of the rosemary. Stir well, pour into an oiled cake pain about 11" in diameter, or use a rectangular pan, large enough that the mixture is less then 1/4" high. Sprinkle the top w/the remaining pine nuts, a few rosemary leaves,. Bake at 450 F for 30-40 minutes or when the top is golden & crisp & cracked. Serve warm, should be soft & creamy inside. A recipe from Tuscany. I think there's at least one non-wheat Austrian cake cake or torte recipe but it's probably pretty sweet.
I've made almond "flour" by grinding almonds in a coffee bean grinder (to substitute for 1/2 cup of wheat or other grain/seed in bread), probably the same can be done w/chestnuts. I live in OR and can get fresh chestnuts when they're in season, less expensive then buying jarred or canned chestnuts although a bit more work as you have to shell them.