Many Americans think the threat of covid-19 will continue for months, survey shows

Most Americans are still concerned about the spread of covid-19 in their communities – and they expect the pandemic to continue to be a concern into 2021, according to a survey from Consumer Reports, a consumer research, testing, and advocacy organization.

A majority of Americans – 78 percent – remain concerned about the continued spread of covid in their area over the next month, including 44 percent who are “very concerned.”

While July’s spike in concern temporarily narrowed the difference between men and women, this month the gap is wider than ever – with 52 percent of women saying they’re “very concerned” compared to just 34 percent of men.

“Concern about spread over the next six months is virtually identical to concern over spread in the next 30 days, indicating most Americans do not anticipate a drastic reduction in the threat of COVID spread in their local communities for some time,” said Kristen Purcell, chief research officer for Consumer Reports.

The latest Consumer Reports survey was conducted between Aug. 7 and 19. 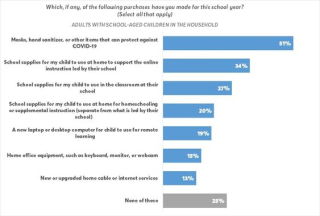 Forty-two percent of Americans with school-aged children favor schools remaining closed with students taking all classes online, while 31 percent favor partial reopening with a mix of online and in-person classes.

This is a slight shift from July, when 37 percent of adults with school-aged children favored online only and 33 percent favored a hybrid approach.

Adults who live with school-aged children are concerned about the ability of teachers and staff to prevent the spread of covid in schools.

Consumer Report’s August survey found that a majority of adults with school-aged children – 61 percent – aren’t confident schools can prevent covid spreading, including 33 percent who are “not confident at all.”

This is consistent with findings from last month, indicating that as schools begin to reopen, confidence that schools can keep children and staff safe is holding steady.

About half of Americans with school-aged children say they have purchased “masks, hand sanitizer, or other items that can protect against covid-19” for this school year. About one in three Americans with school-aged children – 34 percent – have purchased school supplies for their child to use at home during online instruction – slightly more than have purchased school supplies for the child to use in the classroom at school – 27 percent. However, one of four say they haven’t made any of the purchases asked about. 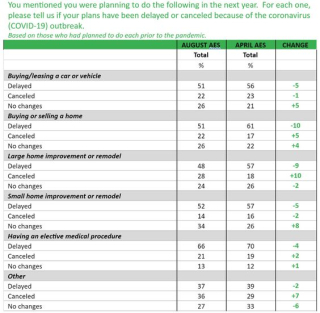 In April, as the pandemic was just taking hold, many Americans told Consumer Reports that they had hit pause on large expenses planned prior to covid such as elective medical procedures, small home improvements/remodels, buying or leasing a vehicle, buying or selling a home, or large home improvements/remodels. August data suggest that as the pandemic drags on, some of those who had delayed expenses have now made decisions about whether to go ahead.

“We are seeing slight but consistent movement away from ‘delayed’ expenses toward either canceling or going ahead as planned in most of the categories we asked about,” said Purcell. “Americans seem to be settling into the reality of the pandemic being here for a while and that might be motivating some to make decisions about big expenses they originally pressed pause on.”

For example, in April, 56 percent of Americans who had planned to buy or lease a vehicle said they’d delayed it. In August, that figure dropped to 51 percent.

For large home improvements, more Americans seemed to have moved by August to canceling these plans.

Not ready to fly 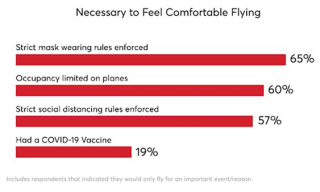 Half of Americans would only fly for an important event such as a family emergency. The majority of those say that strict rules around social distancing and mask wearing would need to be in place for them to feel comfortable flying. Nineteen percent wouldn’t feel comfortable flying unless they had a covid-19 vaccine.