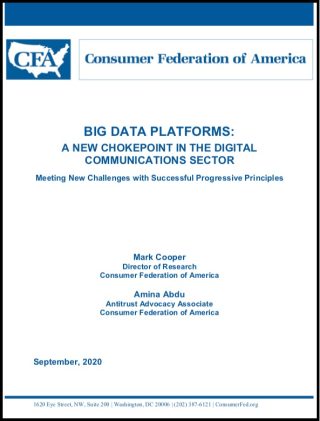 Last week, the Consumer Federation of America partnered with Public Knowledge to weigh in on the European Commission’s Impact Assessment, a new competition tool for the digital age. The commission is looking at expanding its antitrust toolkit due to concerns about gaps in the current EU competition rules.

“We fully expect the U.S. to witness a similar debate and adopt policy to end the abuses of these dominant digital platforms,” said Mark Cooper, CFA’s director of research.

CFA is releasing the fourth in a series of reports that looks at the abuses in the two most important segments of the digital communication sector – big broadband networks, such as Comcast, AT&T, CenturyLink, and Verizon, and big data platforms, such as Google, Facebook, Amazon, and Apple.

The series describes the challenge facing regulators today: harnessing the benefits of technology, while ensuring that consumers, rather than a few companies, are able to get the benefits of innovation today and in the future.

Digital markets have given the largest tech companies outsized influence over the economy and over communications, Cooper said.

The fourth report in the series looks at big data platforms and compares them to similar markets – such as big broadband networks, internet service providers, and business data services – to understand the policies that have been successful in the past and can be adapted for the digital age.

“Network effects and economies of scope and of scale – structural characteristics that are particularly strong in these infrastructure industries – can make promoting competition a tricky task,” he said. “But it’s a task we’ve faced before in other industries with pragmatic steps like sector-specific expert agencies and simple bright lines to prevent the worst abuses.”

The report discusses the need for Congress to create an effective regulatory agency for big data platforms.

Another concern is “gatekeepers,” companies that control access to customers or key infrastructure, Cooper said. In the absence of regulation and oversight, gatekeepers have every incentive to abuse their status in order to harm competitors, who rely on these gatekeepers to access the market.

As part of its investigation into a new competition tool, the European Commission is looking at structural challenges, including gatekeeper control.

CFA is hopeful that, if done well, the European Commission’s new tool can become a global model for competition policy, he said.

The fourth report in the series is called "Big Data Platforms, a New Chokepoint in the Digital Communications Sector: Meeting New Challenges with Successful Progressive Principles."