Looking to Martin Luther King Jr. for words of encouragement on the day his life and work are celebrated in 2021 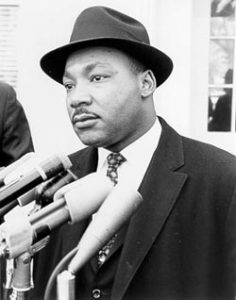 It’s been an important year in the nation’s move toward equality with a wave of protests throughout the nation and the world following the death of George Floyd to demand changes in policing that have led to the deaths of so many people of color.

And, along with calls for police reform, came urgent demands to make changes in our institutions and society that will get rid of racism and racial policies that are so detrimental in the lives of people of color.

Then, on Wednesday, domestic terrorists stormed the nation’s Capitol, some carrying Confederate flags. They were intent on reversing the election of Joe Biden as the 46th president of the United States.

I’m overwhelmed by the idea that they thought they could overturn the election.

I’m a person who focuses on getting as much joy as I can in my life. I often advise others to do the same.

But after Wednesday’s attack, I found my hope for this country sagging.

Today, on Martin Luther King Jr. Day, I’m going to look to his words for hope and encouragement:

“True peace is not merely the absence of tension; it is the presence of justice.”

“Out of the mountain of despair, a stone of hope.”

“We have also come to this hallowed spot to remind America of the fierce urgency of Now. This is no time to engage in the luxury of cooling off or to take the tranquilizing drug of gradualism. Now is the time to make real the promises of democracy.”

“I believe that unarmed truth and unconditional love will have the final word in reality. This is why right, temporarily defeated, is stronger than evil triumphant.”

“The time is always right to do what is right.”

“We've got some difficult days ahead. But it really doesn't matter with me now because I’ve been to the mountaintop... I’ve looked over and I’ve seen the promised land. I may not get there with you. But I want you to know tonight that we as a people will get to the promised land.”