Home About Newsletter Categories Donate
Electrostatic sprayers with lithium-ion batteries packs are being recalled by Victory Innovations due to fire and explosion hazards
Some auto insurance companies quoted higher premiums to drivers with lower-paying jobs and less education, investigation shows 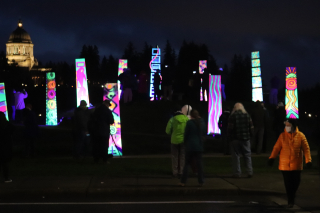 On Saturday, I received a call from a friend to remind that nine glowing monoliths would be displayed in a local park after dark. She thought I might want to go and take photos.

Glowhenge is an art project created by Dave Sederberg owner of Pacific Stage, a lighting, sound, and general staging company.

I arrived and was surprised to find that there were a lot of people looking at the monoliths and more were arriving.

So, I took about a dozen photos from a distance and left. It was a reminder that it’s a pandemic and you just can’t do what you want now and be safe.

Meanwhile, my bloggers friends are writing about health and social issues:

The other morning, Laurie Stone of Musings, Rants & Scribbles came to her kitchen desk and found a picture of her Texan mother-in-law, Joyce, who passed away five years ago. Laurie’s son Paul had put it there while rummaging through some papers. The unexpectedness of seeing Joyce got Laurie thinking. What would her pretty, dark-haired mother-in-law say about the pandemic today? Laurie imagines her giving three pieces of advice...

The causes of interrupted sleep

As we get older, sleep often gets interrupted and we wake up at odd times of the night. This can be caused by a variety of reasons. Rebecca Olkowski, with BabyBoomster.com talks about her “endless nights” and offers a few solutions.

This past week the calendar featured two notable days. On February 2, Groundhog Day, Punxsutawney Phil informed us we are in for six more weeks of winter – ugh. Three days later marked another yearly celebration, assuming celebrants are fans of this particular food, which Meryl Baer of Beach Boomer Bulletin isn’t, as she informs us in this week’s post, “Nutella On My Mind.”

A conversation about accepting a gay child

Having lived through the 1960s, Carol Cassara of A Healing Spirit says she thought the country had social change well in hand. But, the past few years say otherwise. Over at A Healing Spirit, Cassara offers a conversation that she and one of her closest friends had about the coming out experience in “The Gift of Gay: When Your Kid Tells You They're Gay.”

Tom Sightings from Sightings Over Sixty picks up on the Reddit phenomenon from  last week, billed as a revolt against Wall Street. In "I'm Mad as Hell ...," Sightings acknowledges that for the most part it was a media-hyped fad. But, quoting a letter from a doctor, he brings up a serious and current issue that perhaps sparked this revolt as well as others we've seen in the last few years.

Stories of a spunky mom

Jennifer Koshak, of Unfold and Begin, realized February 1st was SOB day. That's Spunky Old Broad Day, and she realized that her mother truly was an SOB. Koshak shares some funny stories that show just how spunky she was.

This is the Best of Boomer Blogs #687. Be sure to click on the articles and let the bloggers know your opinions. Bloggers love to hear from readers.

Fun stuff this week. Thanks, Rita

I love the idea of Glowhenge! So cool.

Great information! I think it's very important to take care of your health. I recently had health problems, but I was able to solve them by contacting a chiropractor. This is a specialist who uses special unique methods of influencing the body, the main goal of which is to rid the patient of various pains, discomfort and a number of diseases.