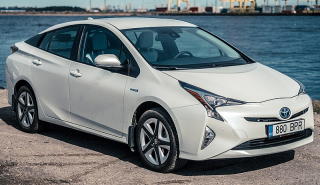 It will use a green leaf icon to designate cars and trucks in its ratings that produce among the lowest amount of greenhouse gases and smog-forming emissions, based on EPA data.

“To most of us on the road, green means go, but increasingly it also signals making a choice in the marketplace that is healthier for communities, better for our environmental footprint, and easier on everyday finances,” said Marta L. Tellado, president and CEO of Consumer Reports, a consumer research, testing, and advocacy organization.

Excessive emission activities, such as driving, are changing the planet’s climate, raising sea levels, harming ecosystems, and causing dangerous effects to human health and welfare, according to the U.S. Environmental Protection Agency.

“Climate change and air pollution present crucial challenges to this country’s health and well-being, and the choices we make matter,” said Karl Simon, director of EPA’s Transportation and Climate Division.

EPA supports the effort to put information in the hands of American consumers to help them make the best decision for their family, their health, and the environment, Simon said.

Two-thirds of Americans are “very or somewhat” worried about tailpipe emissions contributing to health conditions related to air quality, according to a January 2021 Consumer Reports’ survey of 2,223 adults.

Sixty-one percent said that those emissions are a “very or somewhat” important factor when considering which vehicle to purchase or lease.

Among Consumer Reports’ 10 Top Picks in cars and trucks for 2021, four are Green Choices.

This shows that it’s possible for automakers to create vehicles that are safe and sustainable, and also are reliable, perform well, and that owners like, Tellado said.

These vehicles include the Toyota Prius, Toyota Corolla, Toyota Camry, and Tesla Model 3.

“For a long time we’ve included fuel efficiency in our road-test score for vehicles, but until now we haven’t looked at what’s coming out of the tailpipe,” said Jake Fisher, senior director of automotive testing for Consumer Reports.

Green Choice will make the vehicles with the lowest greenhouse gas and smog-forming emissions readily apparent to consumers, Fisher said.

Consumer Reports conducts a series of tests on every vehicle it evaluates, including braking, handling, comfort, convenience, safety, and fuel economy. Its testers drive 500,000 miles per year during the testing process.

For more information, go to CR.org/spotlight.