International Women’s Day is a global day celebrating the social, economic, cultural and political achievements of women. The day also marks a call to action for accelerating gender parity.

Today I’m thinking about the women forebears in my family. 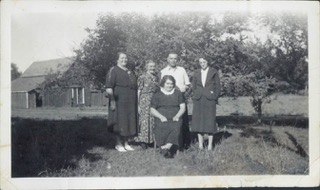 My grandmother, Lillian Hudeck Telecky, center, pictured with her sisters and her husband, lived between Ritzville and Sprague, Washington, where she and my grandfather Charles had a wheat ranch.

She had diabetes, as did my mom. My mom said that my great-grandmother died when she was a young woman from diabetes. It was before insulin was invented.

My mom also had many stories about growing up on the farm. When about a dozen hired men came for the harvest, her job was to go out and kill chickens, pluck the feathers out, cut them up, and cook them for lunch. It was in the 1930s before refrigeration. 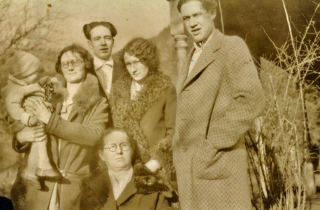 This is my dad’s family. Laura Slingsby, my grandmother, is seated at the center. From left are my cousin Lois May Taylor, aunt Mable Taylor, my dad Minor H. Slingsby, my aunt Jessie McKibben, and my uncle Harry Slingsby.

They had tough times growing up in farming communities, too. They lived in Williston, North Dakota. It was a harsh country for farming. They tried homesteading, and uncle Harry had to go to town to get help when they ran out of food and wood and were huddling under buffalo robes to keep warm.

In addition, my grandfather Peter Slingsby was an alcoholic and gambler and would spend the money from the flax crops on drinking and gambling. He died in his early 50s when my dad was about 5 years old.

Since my parents were farmers and worked hard physically from dawn to dusk, I wanted to be a professional person and work in an office instead.

While I achieved that, it wasn’t as easy as I thought it would be. As a woman, I faced discrimination in the workplace. I had to be smarter than the men to get jobs and get promoted.

One time when I applied for a part-time job at a community college teaching consumer classes to adults, I didn’t get the job although I had a consumer background and the man who was hired didn’t.

When I asked why, I was told he had a family to support.

When I worked part-time as a correspondent for The Spokesman-Review, I wanted to be a reporter. I applied twice. Both times, the managing editor asked me what my husband did for a job. One time he said the “woman slot” for a reporter was full.

Women have made great strides in the workplace. However, there’s much more to accomplish.

Dear Rita, yep, back in the day, too many "men" drank and gambled, while their wives and kids went hungry and ragged. No wonder women these days are determined to take care of themselves, and their children - and not be dependent on a man (it's called being smart). And no wonder why big-daddy government has to step in and make sure women are able to make it in the world - yay government.