Home About Newsletter Categories Donate
Which fruits and vegetables have the most and least pesticide residues?
Big Tech jumps to No. 1 in lobbying, campaign contributions 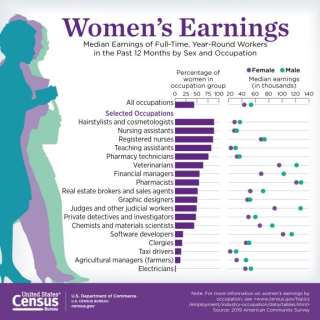 Equal Pay Day is on March 24 this year, a date that marks how far into the year women need to work to earn the same as men did in the previous year.

Equal Pay Day was originated by the National Committee on Pay Equity in 1996 as a public awareness event to illustrate the gap between men’s and women's wages.

Women lose thousands of dollars each year, and hundreds of thousands over a lifetime, because of the gender and racial wage gap. In 2019, the typical woman who worked full time took home just 82 percent of the typical man’s pay.

The disparities are even greater for Black, Native American, and Hispanic women, who earned 63 percent, 60 percent, and 55 percent of white men’s wages, respectively.

While Asian American women make 87 percent of what white men make, the gap for Asian women varies significantly depending on subpopulation, with some Asian women – for example, Cambodian and Vietnamese women – earning among the lowest wages.

For Latinas’ Equal Pay Day doesn’t occur until October because it takes that long for the average Latina to earn what the average white man made in the previous year.

Since the covid-19 pandemic began, women, especially women of color, disproportionately are working on the frontlines, in caregiving, and working to combat the virus, but they continue to earn less than their male counterparts.

In a proclamation on Equal Pay Day, President Joe Biden said the nation needs to begin by passing the Paycheck Fairness Act, which will take steps towards the goal of ending pay discrimination.

For example, Biden said, it will ban employers from seeking salary history – removing a common false justification for under-paying women and people of color – and it will hold employers accountable who engage in systemic discrimination.

“The bill will also work to ensure transparency and reporting of disparities in wages, because the problem will never be fixed if workers are kept in the dark about the fact that they are not being paid fairly,” he said in the proclamation. “Relying on individuals to uncover unfair pay practices on their own will not get the job done; when pay data is available, workers can better advocate for fair pay and employers can fix inequities.”

And, he added, this commitment also means increasing pay for childcare workers, preschool teachers, home health aides, and others in the care economy – and taking additional steps to increase wages for American workers, such as raising the minimum wage and empowering workers to organize and collectively bargain, both of which are important to reducing the wage gap for women.

“There is still significant work to be done to make sure our daughters receive the same rights and opportunities as our sons, and that work is critical to ensuring that every American is given a fair shot to get ahead in this country,” Biden said in concluding his proclamation. “Today, on Equal Pay Day, we recognize the role that equal pay plays in building back better for everyone.”