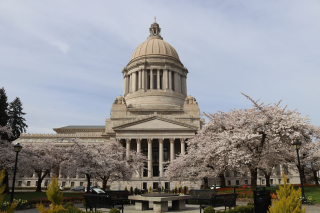 With more than 1,000 people dying a day from the coronavirus in the United States now, it’s difficult to think about making jokes.

But, I got my first shot of the Moderna vaccine today, so that’s something.

I waited to get vaccinated because I’m allergic to penicillin and have some immune system problems.

After research, I was just thinking about getting it so I called my doctor’s office Tuesday to see if they had Moderna or the Johnson & Johnson so I could decide. I was leaning toward Moderna.

The receptionist said, “I’ll check,” and she returned to the phone and said “You can get vaccinated Thursday.”

Wow. I decided to take a chance. So far, so good. Just a slight headache. I even went to the capital grounds to take photos afterwards

My daughter Lisa in Spain is good at April Fools’ Day jokes. Her husband’s birthday is on April 1, so she's brought out a banana with a candle and acted like it was a cake, presented a pineapple with a drawing of Sponge Bob inside, wrapped an empty box, and wrapped one of the kid's clothes with an "Oops, your present shrunk."

I did some quick research and sent this list:

My daughter emailed back and said she thought of something.

She wrapped a small photo album they’d prepared with some photos of when her husband was young and put it in a big oversized box. She said, “This is so heavy, I need help carrying it.” So the kids helped her pretend it was really heavy. Then he looked under a bunch of recycled paper, and he found the light photo album.

After a laugh, they said they had a little present for him. They brought in the real present, a special, huge painting of the kids painted by their cousin.