Home About Newsletter Categories Donate
Stop using Maxtrade’s Coolster youth ATVs due to crash hazard and failure to meet safety standard, CPSC and company advise
What happens when homeowner dies without a will? 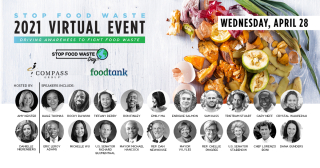 In the United States, up to 40 percent of the food that is produced every year is wasted. That’s an economic loss of $218 billion per year. A household of four spends an average of $1,500 or more each year on food that isn’t eaten.

Food leaders at the food waste event will discuss the importance of reducing food waste and offering solutions in how food loss and food waste can be solved.

Among the speakers are:

Yes, it's a shocking statistic. The more we talk and write about, the more it will bring the information into people's awareness. Not wasting food is a good way to save $1,500 a year or more.

Anyone talking to farmers, supermarket managers and other food store managers? There's a great deal of waste at farms too, since most farmers feel that ugly produce won't sell, so it doesn't get to the market. Supermarkets, etc, discard a lot too. Years ago, a friend worked at a fast food place, might've been KFC. Sometimes kids came in not long before closing, and she'd try to give extra pieces of chicken to them, because anything left over got thrown away. Apparently it was part of the food seller health code or whatever in NY. Whatever is cooked & ready to sell at a fast food place gets tossed if it's not sold that day/night. Her supervisor told her she couldn't give kids extra pieces. If that's still code in NY and elsewhere--that's another source of food waste. A friend worked at a restaurant w/an attached bookstore (she worked in the bookstore), she used to take home at least 2 2-3 gallon buckets of discarded veg from the restaurant, usually salad veg, like lettuce, a couple of days/week. She has around 15 chickens (sells the eggs) and chickens will eat anything--so they got the discarded produce (I guess it wasn't in great condition or she & her son would've eaten it). Another source of food waste that end consumers has zero control over.
I'm kind of tired of hearing about end consumers being blamed for food waste when alot of waste occurs before it get to them. So much responsibility, for food safety, for food waste has been pushed onto "consumers."
Other nations make farmers/those who raise stock animals (chickens, cattle, pigs), and slaughterhouses take on more of the burden of food safety (such as salmonella) instead of consumers--who get lectured on how they have to have instand read thermometers to make sure they bring meat to a "safe" temperature, how they have to have 2 separate cutting boards, one for meat, one for produce, how you shouldn't make/eat anything that uses raw eggs, etc. Nothing about how farming and slaughter house practices in the US lead to contamination and development of antibiotic resistant bacteria (to increase profits of either/both).
I've read there's a small chain that sells "imperfect" or "ugly" produce and that's great and that will decrease food waste, as do gleaners--if they can get permission to go onto farms (usually smaller family farms that grow some veg/fruit) to pick what's left behind after harvest.
I grow a little of my own produce, and I have no problem w/"ugly" so I'd be fine w/buying it--if it was an option where I live.

You're right that farmers and the agricultural industry needs to do more on food waste. In addition, it's unreal that a certain amount of salmonella is allowed in chicken. That's why consumers are told to not wash it but to put it right into the pan and make sure it's well cooked.