Home About Newsletter Categories Donate
What happens when homeowner dies without a will?
Best wishes on May Day 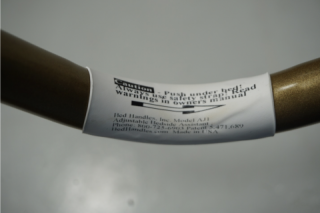 These models – AJ1, BA10W, and BA11W – can create an entrapment hazard and pose a risk of asphyxiation to users.

Because the manufacturer of these bed rails isn’t in business now, the company can’t offer a remedy. Consumers are urged to immediately stop use of the bed rails and dispose of them.

CPSC evaluated the bed rails and found that they can allow an individual to become entrapped between the bed rail and mattress, or within the portions of the bed rail itself, leading to asphyxiation.

These bed rails have been sold online at Walmart.com, MedontheGo.com, soymedical.com, bpimedicalsupply.com, sonomasurgical.com, and other online retailers. The cost was about $80 to $100.

The bed rails have also been found for sale on second-hand sites, such as eBay.com. The model number can be found on a white label located on the bottom of the handle.

The CPSC announced a recall of a previous version of the bed rails in 2014 and 2015 due to an entrapment hazard. These bed rails, manufactured between 1994 and 2007, were sold without retention straps.

Four people died after becoming entrapped in the bed rail; all four victims were elderly or disabled individuals.

Since 2007, the bed rails have been sold with retention straps, but CPSC has found that the straps don’t adequately protect consumers.

CPSC urges consumers to stop using these bed rails and report any related incidents to the agency at www.SaferProducts.gov.