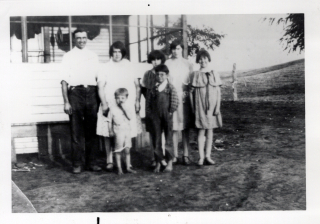 We’re having a heat wave here in the Pacific Northwest. Monday it’s going to be 110 degrees, an all-time record.

But the thing that has captured my attention since Friday is my new photo scanner. It feeds stacks of photos through the machine so it’s much faster than putting photos individually on a flatbed scanner. It also enhances the photos and makes a copy of any writing on the back.

The photo is of my mom’s family, she’s second from the right. I think the occasion was her ninth grade graduation.

Meanwhile, my blogging friends are writing about:

As Carol Cassara of Carol A. Cassara Writer reaches a milestone birthday in July, she embarks on a brand new creative endeavor ... one that she considers both daring and daunting. She talks about it in her post “You're Never Too Old.”

It’s easy to get discouraged by the human race these days. So much fighting, turmoil, and hate. But there’s one place Laurie Stone of Musings, Rants, & Scribbles goes where she sees great diversity. Different breeds get along fine, no matter color, age, shape, or size. Yes, over at the dog park good manners abound – with one notable exception.

Learning from a teen

Tom Sightings from Sightings Over Sixty first knew that something was going on when he heard his son using words and phrases he'd never heard of – such as “sick” and “phat.” That led him to reminisce about some of the sayings and truisms he learned as a kid. Sightings remembers some in “As My Mother Used to Say ...” and wonders if you can offer any other words of wisdom.

Rebecca Olkowski with BabyBoomster.com had an interesting Saturday. A driver who claims he was asleep took out the fence on the property she lives on, crashed into a few other cars, and finally plowed into a house across the street. In view of that, Rebecca wants to share a recipe for “Chilled Green Melon and Champagne Soup” because she really needs some bubbly right now. No one was hurt, but what a way to start a weekend.

Celebrating another birthday
Meryl Baer of Beach Boomer Bulletin celebrated another birthday this past week. Fourteen members of her family joined her, very different from the milestone event that passed quietly last year. She laments birthdays in general, and June birthdays in particular, in this week’s post “Older But Not Wiser.”
This is the Best of Boomer Blogs #707. Be sure to take a look at the articles and join in the conversations.

Fun posts for summer and a couple of birthdays!

Hi I love your blog ! I would like to know what scanner you purchased?.I have been looking for a faster scanner.I keep sending my photos to be scanned but I am way behind.

I bought the Epson FF 680W. It cost $600, so it's more than the flatbed scanners. If you have lots of photos, it could be a good choice. You put a stack of photos in the holder and it feeds them through quickly. It can put all those in the stack in a subfile. Then you can go back and identify the individuals in the photo if you want to in the title of the photo. It also can copy anything written on the back and enhance the photos.

I also scanned a 30-page health diary I made. It turned out well, although it would have been faster to go to a copy store.