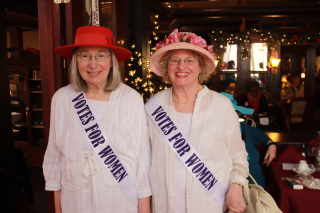 It’s the 101st anniversary of women in the United States being guaranteed the right to vote. The 72-year-long political movement was carried out by tens of thousands of women and men working for equal rights for women.

The women were called suffragists, with suffrage meaning the right to vote in political elections.

With little financial, legal, or political power of their own, and facing a well-financed and entrenched opposition, women fought state by state for their rights as citizens.

To win the right to vote, women circulated petitions, gave speeches, published newspapers, and traveled the country to win support. They were frequently ridiculed and harassed and sometimes attacked by mobs and police. Some were thrown in jail, and then treated brutally when they protested. However, they persisted.

Finally, on August 26, 1920, their goal was achieved with the 19th Amendment. Women were guaranteed the right to vote and hold public office.

“One hundred and one years ago – after fighting, marching, struggling, starving, being starved – women gained the right to vote,” Nancy Pelosi, speaker of the U.S. House of Representatives, said on Women’s Equality Day in San Francisco.

The newspapers at the time said women were “given” the right to vote, but it couldn’t have been further from the truth, Pelosi said.

“It was a big fight,” she said. “It was historic, and it was transformative.”

However, Pelosi said, important work still needs to be done because voting rights are under attack in the country.

H.R. 1, the John Lewis Voting Rights Advancement Act which has passed the House, needs to also be passed in the Senate, she said, adding it would overturn the voter suppression laws that are being enacted across the country.