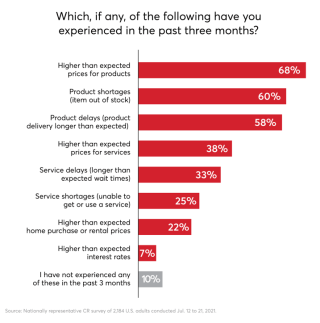 As covid-19 restrictions were lifted and the economy continued to reopen over the past three months, most Americans say they’ve been impacted in the marketplace, according to survey for Consumer Reports, a consumer testing and advocacy organization.

When asked about economic impacts they’ve encountered – inflation, shortages, or delayed products and services – 90 percent said they’ve experienced one or more of these in the past 90 days.

Sixty-eight percent of Americans said they’ve seen “higher than expected” prices for products compared to 38 percent who said it about services. 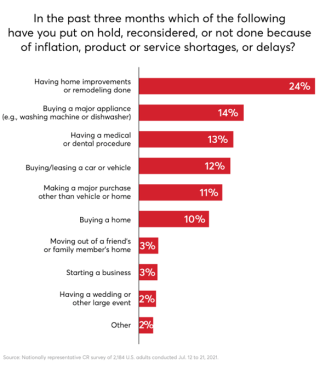 Sixty percent of Americans said they’ve noticed product shortages in the past three months, and 58 percent saw product delays. Nearly half said that they’ve put on hold, reconsidered, or decided against a major purchase or other large expense because of inflation, product or service shortages, or delays.

Twenty-four percent said they’ve paused, reconsidered, or canceled a home improvement project due to inflation, product or service shortages, or delays. Fourteen percent said the same about a major appliance purchase, 13 percent skipped a medical or dental procedure, 12 percent have thought twice about buying or leasing a car, and 10 percent put off or chose not to go through with the purchase of a home.

The survey was conducted between July 12 and 21.

Due to covid and the uncertainty and expense of everything, we've put off dental work and more than one project. Such a strange and uncertain time!

Strange and uncertain is right. Costco is putting limits on some items again and at Walmart I was only able to get four boxes of an eye care product.

This is not a surprise. But then again, i thought i wouldn't see shortages again so soon.

I have become used to substitutes for first-choice food items (for instance, impossible to find low-cal half & half). I noticed some items have reduced sizes, instead of raising prices (we are still paying more!). And restaurant prices have sky-rocketed.

Interesting that restaurant prices have sky-rocketed. I'm not going out to eat yet.